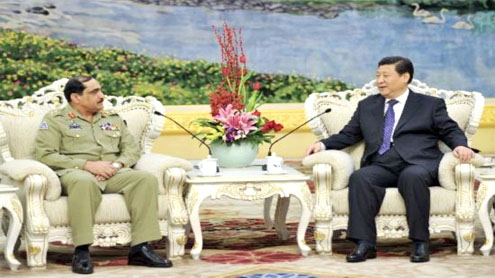 BEIJING: China and Pakistan have planned a packed schedule of military exchanges for this year, marking the 60th anniversary of establishment of their diplomatic relations.  This will include two Chinese naval visits to the Pakistani port city of Karachi in August and October and two joint military exercises, said General Khalid Shameem Wynne, Chairman of Pakistan’s Joint Chiefs of Staff Committee, in an interview. In addition to the two bilateral army and air force exercises, the two countries will also participate in a multinational naval drill next month.“Another joint counter-terrorism exercise is set to be held in Pakistan next year,” General Wynne said in an interview published in China Daily Monday, adding the two countries are working to make it an annual event.A similar drill, led by General Wynne, was conducted in northwestern China’s Ningxia Hui autonomous region last year.“We are looking forward to further interaction with the People’s Liberation Army (PLA),” Wynne said.He pointed out that the two countries are moving forward in the joint development of sophisticated weapons systems, including tanks.The General expressed his satisfaction with the JF-17 Thunder aircraft programme, jointly developed by China and Pakistan, and said that this is one of the leading combat aircraft in the world.The JF-17 programme is one of the biggest joint projects taking place between the two strategic partners.General Wynne on Sunday wrapped up his five-day China visit, which took him to Beijing and Shanghai.

His major purpose in visiting the country was to co-chair the Eighth Sino-Pakistani Defense and Security Talks with PLA Chief of General Staff Chen Bingde.General Wynne, who visited China for the first time since he was promoted to the rank of general and assumed his present position in October 2010, termed the China-Pakistan bilateral strategic relationship as a “stabilizing force” in the region.During his stay in Beijing, he met Vice-President Xi Jinping and Minister of National Defense Liang Guanglie and both sides reaffirmed their determination to consolidate their “all-weather” friendship and deepen pragmatic cooperation – APP