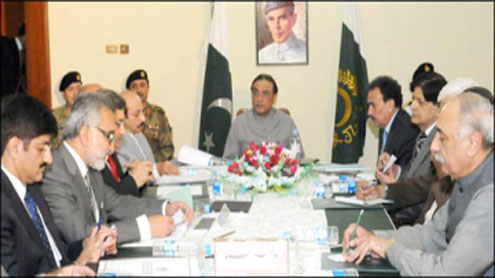 KARACHI: President Asif Ali Zardari on Monday held a meeting in Bilawal House Karachi with Sindh Ministers belonging to  PPP to take stock of political situation in the province and in the country and discuss matters relating to the coalition partnership.Sindh Chief Minister Syed Qaim Ali Shah gave a briefing on the political situation in the province and coalition matters.Addressing the meeting the President said that the policy of reconciliation with all political parties will continue as that was the most viable way to move forward at a time when the country was beset with serious politico-economic problems and no political party or institution could address them single-handedly.He said that Shaheed Mohtarma Benazir Bhutto had the vision to realise it even before returning to the country. She wrote her last book titled “Reconciliation” and had prepared herself for steering the country through coalition politics on her return to Pakistan, he said.The President said that the PPP Ministers would be judged by the people and the voters on the basis of their performance in office and contacts with the masses and advised them to address people’s problems by holding open Kutcheries not only in their constituencies but throughout the province – APP