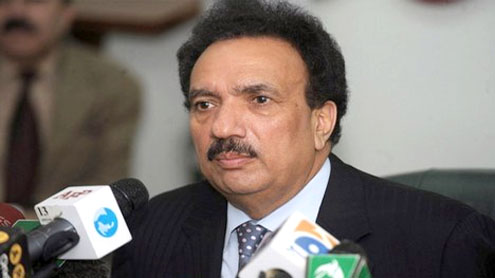 ISLAMABAD: Law enforcement agencies have arrested a high-profile terrorist, who wanted to hit Islamabad with rocket launchers from the Margallah Hills, Interior Minister Rehman Malik told media here on Tuesday.The importance of the terrorist can be gauged from the fact that he was operating in different areas of the country, including the Federal Capital, the minister added.He said that the arrested terrorist might be described as a handler or an operator because his past record depicted his involvement in subversive activities.The security agencies have arrested almost all the members of his gang, while the remaining one or two criminals would be nabbed soon, he added.The minister hoped that thorough investigation of the arrested terrorists would reveal more facts about the gang and its operation.The security in Islamabad has been further strengthened,Rehman said, following the arrest of the gang members.He said there had been indications that some external powers wanted to destabilize the country – APP