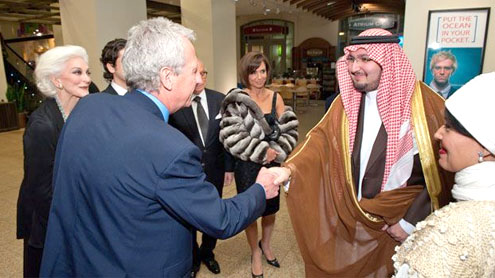 WASHINGTON: “Arabia 3-D” made its debut on Tuesday at the Smithsonian National Museum of Natural History at a glittering movie premiere worthy of a Hollywood blockbuster, attended by an impressive array of Washington diplomats, Middle East experts, and members of Congress.Participants at this invitation-only screening the new IMAX film were treated to a beautifully-realized journey into the history and landscape of the Arabian Peninsula.The 45-minute film — recorded on 70-mm film and viewable in three dimensions with the aid of special glasses — offers viewers an enhanced and rich understanding of Saudi Arabia and Islamic culture.The movie expertly traces the birth of Islam and its influence during its “Golden Age,” gives an impressive synopsis of Arabia’s first “Golden Age” of the Nabataean civilization and their winter home in Madain Saleh.“When people think of Saudi Arabia, they think of oil, sand and camels. After 9/11, they added terrorism,” said Adel Al-Jubeir, Saudi Arabia’s ambassador to the United States, during introductory remarks.“But Saudi Arabia has a long, rich history,” he added. “It is also a young country, as most of its citizens are under 30 years old.”The ambassador reminded the audience of several hundred of Washington’s dignitaries that “Saudi Arabia is one of the responsible actors on the world stage; it is a peace maker, it offers reliable energy, and it is involved in interfaith dialogue … Saudi Arabia also stands for security and stability in our region,” he said. “We have been very firm, and are very firm, about going after terrorists.”Turning to the movie, the ambassador called “Arabia 3-D” a great achievement.  “It tells the story of Saudi Arabia from a human perspective, by showing normal people who are seeking to lead normal lives.”

Robert Lacey, author of “The Kingdom,” was also present at the screening.  “This is the first movie ever made entirely in Saudi Arabia,” he said, correcting the common public misperception that the iconic movie, “Lawrence of Arabia,” was filmed in Saudi Arabia.“Actually, that movie was shot mainly in Spain,” he said.He gave special tribute to Khaled Ali Reza and the Xenel Group, “Who had the vision to bring the talent together to make this movie.” Lacey also said that making the movie would not have been possible “without the support of Prince Talal bin Abdul Aziz who saw, and understood the potential for this film.”Lacey added that Prince Talal’s son, Prince Abdul Aziz, was representing his father at the screening.Also present was Greg MacGillivray, an American film director and cinematographer and the director and producer of “Arabia 3-D.”MacGillivray was nominated for an Academy Award in 1995 for directing “The Living Sea” (Best Documentary Short Subject) and was nominated in the same category again for directing “Dolphins” in 2002.

He is credited for inventing three cameras for the IMAX format, and made the biggest money-making IMAX film, “Everest.” MacGillivray, said Lacey, also made the longest-running IMAX film, “To Fly,” which has been running for 35 years at the Smithsonian’s National Air and Space Museum.The Air and Space Museum, back in 1974, housed the fourth IMAX theater ever built; now, there are over 600 worldwide.MacGillivray said the movie is scheduled to play in 32 countries.“It is my hope that this movie will be a bridge of understanding.“The first thing I did when I agreed to make the film, was to spend three weeks traveling everywhere around Saudi Arabia,” said MacGillivray. “There I found green mountains, beautiful seashores and the grand deserts. But the thing we found there that was most special was the hospitality of the Saudis.”“It was a wonderful experience to be welcomed so warmly into so many Saudi homes,” said McGillivray.

He later told Arab News that he “fell in love with the Arabian culture” including the “richness of the community life” and admired the “contrasting beauty of the cities’ architecture and the desert landscape.” MacGillivray explained that the film is seen through the perspective of 23-year-old Saudi student filmmaker, Hamza Jamjoom, who — along with Academy Award winning actor Helen Mirren — narrate the film.The 3-D effect of the film is particularly striking in the many underwater scene in the film, but many of those present told Arab News that they found the scenes of three million Haj pilgrims praying together at Makkah the most breathtaking.Additionally, the Arabic music that plays throughout the movie impressed the viewers that Arab News spoke to at the event.Their conceptions of Arabic music, said one lady, was that of high-pitches, not at all true with the eloquent voices that haunt the listener throughout the movie – Arabnews