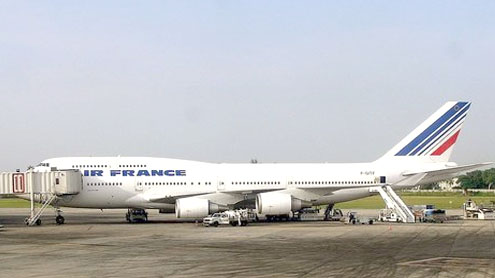 Paris: The French may have been a bit hard on their royals during the 1789 revolution, but it must be admitted they haven’t forgotten how to give a right royal treatment to people who demand and pay for it today.In this period of cut-throat airline competition when premium-paying passengers can shift loyalties on a whim, Air France’s La Première 1,000 square metre lounge at Paris’s Charles de Gaulle (CDG) airport provides a tailor-made VIP service.There’s a 30-minute free spa treatment, while a contemporary touch to its gastronomic offerings come courtesy of award-winning chef Alain Ducasse. There’s also a personalised shopper, check-in and boarding service.”It’s an end-to-end service on the ground and in the air,” said Pierre de Saint-Albin, Air France-KLM’s general manager for the Gulf, Saudi Arabia, Iran and Pakistan. The new service was unveiled to the media recently after months of word-of-mouth publicity since its launch in July.Exclusivity starts from the moment passengers arrive at the airport, through to the personalised welcome by the crew on board the aircraft. On arrival in Paris, staff accompany La Première passengers to the arrivals lounge, where their baggage is first off the belt.Passengers wanting to freshen up or have their clothes ironed can do so at the Arrivals lounge, located in Terminal 2C. They also do not have to endure the long immigration queues.The service is currently available to more than 50 long-haul destinations, including Dubai, served by Air France Airbus A380s and A340s, and Boeing 777s.”It redefines the codes of luxury to satisfy customers for whom attention to detail is a priority,” de Saint-Albin said.In the sky, two-metre seats await the travellers, which can turn into flat beds and come with a feather duvet, a pure Merino wool blanket, a “boudoir” cushion and an anti-allergy feather pillow.

The seat integrates a back massage, a noise-reducing hi-fi headset, on-demand video, a PC power outlet and an individual tele-phone, among other bells and whistles. The on-board menu is concocted by three of the biggest names in French gastronomy, all Michelin-starred advisers for Air France’s “Servair Culinary Studio”.Jean-Paul Claret, job rotation manager for Air France at CDG, explained that on most Air France flights two flight attendants are specially assigned to La Première passengers throughout the flight.The airline has dedicated 1,000-strong team of pursers and cabin staff — out of a total of 15,000 flight attendants — to be constantly attuned to the needs of their first-class customers. A premium economy seat is a bit of an oxymoron, but that’s how Air France is redefining affordable business air travel.

For a little more than an economy seat, Air France has introduced a recession-beating Premium Voyageur, a cabin meant for long-haul customers, located between the Voyageur (economy) and Affaires (business) cabins.The airline is retrofitting all its aircraft to provide the additional class, said Pierre de Saint-Albin, Air France-KLM’s general manager for the Gulf, Saudi Arabia, Iran and Pakistan.With 40 per cent more room compared with the Voyageur cabin, the Premium Voyageur class gives passengers priority treatment and 25 per cent more “Flying Blue” miles. The service is available on A330, A340 and B777 aircraft and is gradually being introduced on the A380.The free baggage allowance consists of two bags of 23 kilograms each, and Flying Blue members benefit from an additional free bag allowance (23 kilograms).A Paris-Beirut round trip would cost €1,179 (Dh5,967), while Paris-Hong Kong would be €1,657, and Paris-New York is €1,038. Fares in Premium Voyageur to Paris from Dubai start at Dh4,870, and from Abu Dhabi it’s Dh4,480 – Dailymailnews