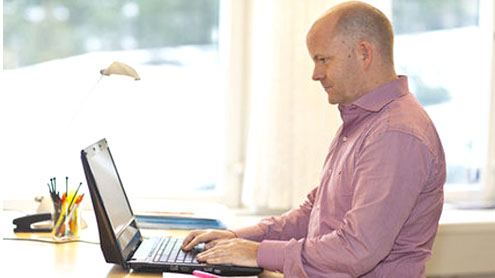 BILLED as a global first, a laptop allowing users to open files, play music and view pictures using just the power of their eyes was turning heads Wednesday at the CeBIT, the world’s top tech fair.The otherwise unremarkable laptop integrates cutting-edge “eye tracking” technology by Swedish firm Tobii that follows the movement of the user’s eyes and allows him or her to operate menus and select icons.The prototype is also good for the environment as it recognises when you are not looking at it and automatically goes into screen saver mode, saving energy, Tobii says. It restarts as soon as the user glances at the monitor again.“It’s definitely going to be in the laptops of the future,” said Anders Olsson from Tobii. “You can do pretty much anything you would do with your normal laptop.“We’ve been stuck for a quarter of a century with a keyboard and a mouse. It’s time to move to the next step and eye control technology is the perfect solution.”The technology is already used in other areas, including in car safety where a sensor tracks eye movement to determine whether the driver is drowsy, and in helping paralysed people operate everyday objects just with their eyes. However, this is the first time it has been applied to a laptop.The prototype has only just been developed, said Olsson, adding that if the technology gets taken up by IT firms, it could be in the shops in the very near future.“It’s probably a couple of years away,” he said. More than 4,200 exhibitors are showcasing their latest gadgets and technology at the CeBIT in Hanover, Germany, which hopes to attract 350,000 visitors by the time it closes on March 5 – Nation