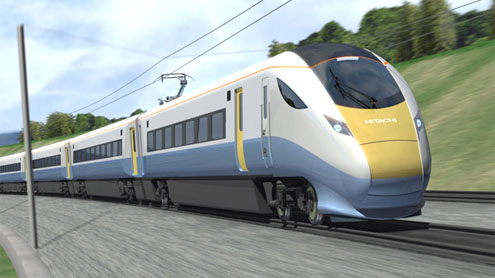 LONDON (Kyodo) The British government said Tuesday it is entering final negotiations with Hitachi Ltd. to supply a fleet of new express trains, a big step forward for the electronics giant to win the £4.5 billion (around ¥600 billion) deal.The procurement process had been put on hold by the Conservative-led government launched last May due to fears over the cost of the contract, which was initially set at £7.5 billion (about ¥1 trillion).But following talks, Agility Trains Ltd. — a consortium comprising Hitachi, British developer John Laing PLC and Barclays Private Equity — has come up with a cheaper deal of around £4.5 billion for around 100 trains, according to sources close to the deal.Transport Secretary Philip Hammond said the government will proceed with the Agility plan and detailed negotiations are expected to be concluded by year’s end.When finalized, the manufacture of new trains will start in 2015. They will be a mix of all-electric trains and some with a combination of electric and diesel power, allowing them to operate a through service beyond the electrified line.“It is a great pleasure,” Minister of Economy, Trade and Industry Banri Kaieda said in a statement, noting his fellow Cabinet ministers had been urging the British government to resume negotiations with the Agility Trains Ltd. consortium.Kaieda said he is aware Hitachi won “a high evaluation” from the British government by making a proposal that would lead to improved convenience and safety for the British railway system.Hitachi President Hiroaki Nakanishi said in a separate statement that the company “highly appreciates” the decision by the British government and the support from Tokyo.Hitachi plans to double the revenue from its railway business by 2015, and by establishing a toehold in the European market with the British deal it aims to expand its railway business there.In a statement, Agility said, “Agility Trains has worked very hard to improve value for money in response to the U.K.’s public financial position and has passed on 100 percent of all value for money benefits to the U.K. government.”

“The Intercity Express Program includes delivery and maintenance of a family of new state of the art Super Express Trains which will constitute a step change in capacity, improved reliability and reduced environmental impact on every train journey.”The company said that a site in Newton Aycliffe in County Durham, northern England, is the preferred site for its planned European rolling stock manufacturing and assembly center. The investment will generate 500 jobs.Agility was announced as preferred bidder for the contract in 2009 and was close to reaching a deal when in February 2010, the government decided to conduct a review under its austere fiscal policy. Since then, the negotiations have remained on hold – Japantimes