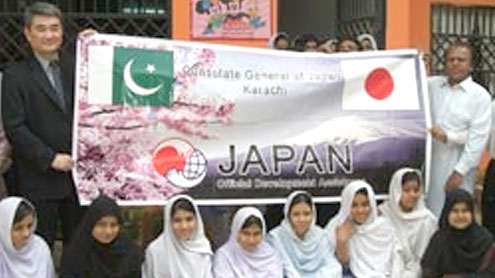 KARACHI: The Japanese government in collaboration with Idara Al-Khair Welfare Society inaugurated Al-Khair School here at New Karachi on Wednesday.The school has a cost of $70,821 (approx Rs 6 million) funded under the Japanese government’s scheme of Grant Assistance for Grassroots Human Security Projects (GGP).The inauguration ceremony was conducted at the school building in the presence of acting Consul General of Japan Toshikazu Isomura. The school facility was extended from the Japanese Consulate to Idara Al-Khair Welfare Society (NGO) President Mohammad Mazahir. Students and local people also attended the ceremony and applauded the philanthropic efforts of Japan and the Pakistani NGO.Isomura while addressing the inauguration ceremony said that the government of Japan believes basic education is absolutely essential for human beings. In order to utilise their potential to achieve personal fulfilment and dignity, it is necessary for them to acquire abilities to read, write, and think critically, he added. He further said, in order for a country to become self-reliant, it is vitally important for a wide range of human resource to be cultivated, from doctors to lawyers to engineers fixing cars.Japanese government trying the better implementation of this project will surely be a driving force for spreading better basic education in Karachi, and that it will be inspiring to see the residents enjoy better standards of living, he said.

Japanese government and the NGO had agreed and signed on this education development project on Feb 24, 2010, and since then both parties had made tremendous efforts to set up an educational institution with the purpose of helping more local people to access free and quality education, he added.Mazahir in his address said that the acting consulate general of Japan sincerely hopes that the above efforts will help upgrading the living condition of the local people, and also wishes that this support from the people of Japan will strengthen the present amicable relationship between Pakistan and Japan – Dailytimes