Mallika Sherawat’s a US socialite now! 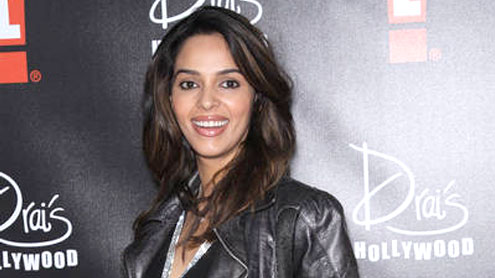 When Mallika Sherawat tweets that she’s been hanging out with Sir Elton John after the Academy Awards and that Golden Globe nominated Scarlett Johansson is her friend, it’s not because she’s in la-la-land.She’s really in Los Angeles, where she’s covered much ground on the social scene. Mumbai was merely a pit stop for this actress from Haryana, who has turned into a Hollywood socialite even though her Jennifer Lynch-directed Hisss was a turkey and her low-budget Politics of Love is yet to be released.She’s been tweeting about her star encounters (‘Scarlett Johansson is supacool’ and ‘Just met Elton John! He said I look divine’).Mallika, on Oscar night, attended the legendary Governor’s Ball, hosted by the Academy Board, and hung out with Oscar winners and nominees.After the event she attended many after parties, John’s being one of them. Our sources caught Mallika and Oscar-winning actor Jamie Foxx exchanging pleasantries.The actress, whose agent William Morris also represents Ben Affleck, Richard Gere and Emma Thompson, has left Bombay abuzz on her social skills. Whether at the riverfront at Cannes or the ceremony to name a milkshake after her.“Today, Mallika has become a big socialite in the US. She knows so many people that you will find it hard to believe. And all the biggies, mind you.You will frequently find her dropping names and saying ‘I met so-and-so, and oh, he praised me,'” says a former career associate.Mahesh Bhatt whose Murder she acted in says, “Yes, she does it every time, being seen at the right place. She knows how to attract eyeballs. From the lanes of Haryana to the Oscars! We should applaud her for that.She has that Indian quality that attracts foreigners. They find her exotic. I met her when she was promoting her last film Hisss and I just knew that she was on the make.”He adds she learnt this game in Mumbai during the making of his film. A close friend of Mallika’s says the man who actually turned her knight in shining armour was Govind Menon, the producer of Hisss. “There were many stories about their affair too.He always told her ‘Yahaan kuch hone wala nahin hai. Tum foreign deshon mein raha karo aur phir dekho tumhari taqdeer kaise badalti hai.” Seems Mallika went to town with this tip.

Before Murder made her a household name, Menon had cast her in the 2003 turkey Khwahish, in which she smooched co-star Himanshu Malik as many as 17 times.Even after Murder failed to make her an A-lister, Menon cast her again in Hisss and convinced her to move bag-and-baggage to LA in 2008.India’s most Bollywood-steeped fashion designer Manish Malhotra is happy for this diva’s recently and exponentially acquired internationalism. “I think it’s great that Mallika was at the Oscars with Aishwarya and Abhishek.That girl is daring and in-your-face. I would give her 7/10 on the white gown she donned at the function.”Ratan Jain, who was a very good friend of Mallika (until Hisss that is) is less generous in his praise.Perhaps the fact that co-producer Menon took complete charge of Mallika’s career post-Hisss might have something to do with this. Says Jain, “Yes, I keep seeing Mallika’s pictures almost every day in some paper or the other. Her PR machinery is apparently doing very well.”Mallika, whose low-budget Hollywood flick Politics of Love is yet to be released, sure has covered much ground for a starlet who cut her teeth in small-time modeling as Reema Lamba. As to how she affords this Hollywood glitter is mystery that the headline-chasing Mallika will not reveal – TOI