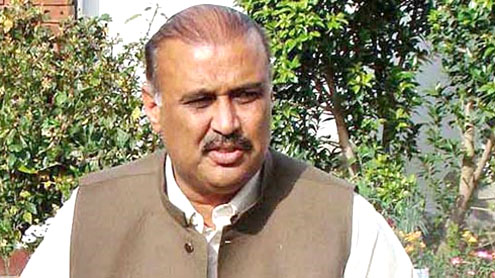 LAHORE: Punjab Assembly Speaker Rana Iqbal Ahmad Khan, while admitting that PPP is a major opposition party in the Assembly, has given a go-ahead signal to notify Raja Riaz Ahmed, the parliamentary leader of the party, as a new opposition leader after receiving resignation from PML-Q’s Chaudhry Zaheeruddin, former opposition leader of the House.Zaheeruddin met the speaker in his chamber at the Assembly’s Secretariat Wednesday afternoon and submitted his resignation, saying he had no more right to continue as leader of the opposition when the PPP had a clear mandate to have its own man installed as the opposition leader, since it enjoyed the support of highest number of MPAs numbering 108.The speaker immediately accepted the resignation of Zaheeruddin and appreciated the services he rendered during his stint as the opposition leader.Soon after, Riaz along with other party MPAs, including Tanveer Ashraf Kaira, Tanveerul Islam and Faiza Malik, met the speaker in his chamber and filed an application signed by the party members nominating him as the new opposition leader of the assembly at a time when the PPP has distanced itself from the ruling PML-N in the province.The speaker assented to the nomination of Raja Riaz as the new opposition leader. However, till filing of this report, notification of his nomination had not been issued.Later, Riaz told journalists that he had submitted the application to the speaker for his nomination as the opposition leader. “PPP is the largest party in the asssembly,” he said, adding that he was ready to present himself before masses for accountability. “I am even ready to accept punishments. If I have done anything wrong during the last three years of my parliamentary career,” he volunteered.Riaz said that his party wanted implementation of the Charter of Democracy and the 18th Amendment. “PPP will also like it to be implemented by its partners as well,” he elaborated.He vowed not to allow anyone to promote politics of turncoats in the assembly. He also expressed the resolve to unfold all the hidden facts about the ‘bad-governance’ of Punjab Chief Minister Shahbaz Sharif and his government.He urged Sharif family, especially Shahbaz, to give up his ‘Mughal Life Style’. “If you are a true pro-people politician, then you should not lead an extravagant life,” he asserted.He claimed that since Shahbaz had changed the ministerial portfolios of Dost Mohammad Khosa and Kamran Michael due to their corruption. “Now the PPP will also disclose all the facts about the PML-N led government and its leadership – Dailytimes