Siemens to set up center of engineering excellence 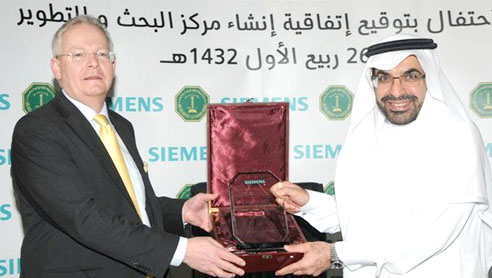 DHAHRAN: Siemens Energy announced on Wednesday the founding of a specialist facility to be based at the King Fahd University of Petroleum & Minerals (KFUPM) in Dhahran, one of the leading research and teaching institutions in the Middle East.The center will provide collaborative R&D support for energy related topics, knowledge sharing, as well as training for local students and for the Kingdom at large.The founding is a further milestone in a long series of Siemens achievements in Saudi Arabia.The company received an order from Saudi Arabia for the supply of components for a combined cycle power plant with an associated seawater desalination facility for the Ras Az Zawr power plant.The order volume for Siemens is more than $1 billion, one the largest orders posted by Siemens Energy in the Middle East.Prior to this, Siemens revealed plans to establish a manufacturing and service facility in the Kingdom.The manufacturing facility will include local production and create many job opportunities for both Saudi and international experts.Earlier in February, Siemens and Saudi Aramco had signed a corporate procurement agreement.This corporate-level agreement is strengthening the cooperation between the two companies and will lead to more cost efficiency for both companies due to reduced project times.These activities are a result of a well-established relationship and a continuous meeting culture of the Saudi authorities and customers and the Siemens executive management from both the global and the regional headquarters.During a recent visit to Saudi Arabia, members of the Siemens executive management discussed infrastructure projects in the Kingdom and attended the signing ceremony of the R&D partnership with the KFUPM.The facility will be established in the Dhahran Techno Valley (DTV), located in the Eastern Province and will offer investment into certain projects related to R&D, including energy efficient concepts for oil and gas, fuel flexibility concepts for gaseous and liquid fuels, gas turbine technology, renewable energy, advanced water treatment and green technologies.

Siemens will conduct research in collaboration with customers such as Saudi Basic Industries Corporation (SABIC) and Saudi Aramco, as well as various educational/research organizations such as KFUPM and King Abdullah University of Science & Technology (KAUST).Siemens will sponsor two facility professors for power generation (including renewable) at KFUPM, as well as absorbing 10 of its graduates per year.Wolfgang Dehen, CEO of energy sector, Siemens, said: “The initiative with KFUPM is a further step in building Siemens’ overall commitment in Saudi Arabia. We place great importance in growing the skills of its people through training, support and vocational opportunities, and will strive to add extra value to the world-class programs already being implemented by the university. Siemens is a global technology leader with strong local roots in the region and has a high interest in identifying and utilizing local talents for all fields of business and R&D we operate in.

”Anwar Aleitani, vice president of Siemens Saudi Arabia oil and gas division, said: “Through the establishment of an R&D center in DTV, Siemens is dedicated to the development of local talent and infrastructure in the Kingdom through training and technology transfer. Educational institutions offering advanced research opportunities on key engineering topics will be ideally suited for the future of the Kingdom as a center of academic excellence.”Khaled Al-Sultan, rector and CEO of KFUPM, explains: “Siemens’ DTV initiative aims to provide a platform for the development of new technologies in the Kingdom through research in one city, Dhahran. The new manufacturing and service facility Siemens plans to build is also located in the Eastern province. It will also be a center of excellence and play an important role in technology transfer among the local workforce.”On the occasion of the founding event Al-Sultan also said the establishment of the center in DTV is in line with the vision of KFUPM, which aims at building strong ties with world renowned companies.

“This center, which will be built on an approximate area of 7,623 square meters, speaks for the university’s commitment to intensify its relationship with the industrial sector,” he said and highlighted the prominent role the Dhahran Techno Valley is playing to build relationship with industry and encourage innovative ideas for the application and effective use of technology in vital areas of importance for the Kingdom, such as petroleum, gas, water and information technology.Faleh Al-Sulaiman, vice rector for technology development and industrial relations, said the university, in partnership with Saudi Aramco, is utilizing the opportunity to invite world renowned companies to join DTV, thereby paving way for technology transfer from West to East.He said the university is tirelessly working toward achieving its ambitious objectives to excel in all areas of scientific research through Dhahran Techno Valley Company.Siemens has been present in Saudi Arabia for more than 75 years and currently has around 1,800 employees operating within the Kingdom – Arabnews