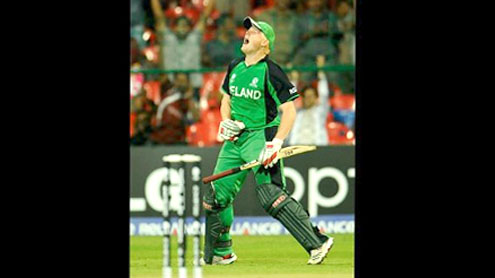 BANGALORE: England must raise their game by several notches if they are to stay alive in the World Cup and Andrew Strauss admitted that unless they stopped “chasing their tails,” their journey could come to a premature end.England’s World Cup hopes are hanging by a thread after Ireland pulled off the biggest upset in the tournament by defeated them by three-wickets on Wednesday to blow Group B wide open .Having narrowly beaten the Netherlands, England’s remaining matches are against West Indies, Bangladesh and South Africa and skipper Strauss admitted that there is no margin for error if they are to go through to the next round.“The game coming up against South Africa (on Sunday) is a huge one for us,” he said.“Generally we bounce back well from defeat in the past whether it’s in test cricket or one-day cricket and we are going to have to do that very quickly and probably be very honest with each other and realize where we can improve and make those improvements very quickly.”One area of improvement would definitely be their bowling attack which have now conceded three of their highest four World Cup totals in their matches this tournament.Strauss admitted that bowling on the flat sub-continent pitches was always going to be difficult, but flayed his bowlers for the way they have conceded most of those runs.“What we don’t want to be doing is hemorrhaging both sides of the wickets and kind of chasing our tails too much which potentially we have done in the last three games,” Strauss said.England’s fielders have also failed to back up their bowlers with lazy fielding, spilled catches and missed run-outs characterising all their matches so far.Strauss knows his team cannot afford to make any more mistakes and only perfect performances against the stronger opponents will keep them in the title hunt.“Hopefully that will galvanise us as a team and the equation is pretty simple now. We can’t afford any slip-up and have to go out there and deliver – Arabnews