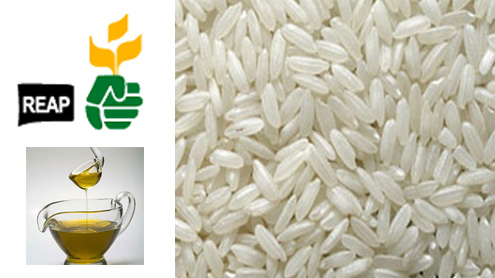 Rice Exporter Association of Pakistan (REAP) will send a delegation to India with government support to discuss and negotiate the possibilities of importing at least 10 plants of rice bran oil (RBO) extraction. REAP chairman Irfan Ahmed Sheikh said here Friday that the delegation has been planned on the directives of President Asif Ali Zardari and Commerce Minister Makhdoom Amin Fahim during their recent visit to Japan. He said that this idea was floated by the President during the meetings with leading Japanese companies, dealing in rice related by-products, particularly rice bran (husk) oil which is the most expensive oil in the world. The President had advised rice exporters to get Japanese technology to extract oil from rice bran.

He said that REAP has requested the chief executive of Trade Development Authority of Pakistan Tariq Iqbal Puri to lead this delegation.Shaikh pointed out that some Indian companies are also dealing in RBO plants but importation of plants/machineries from India is banned in Pakistan.He said that federal Secretary Commerce Zafar Mahmood, on the recommendations of chairman REAP and CE TDAP, has put the matter in the Federal Cabinet meetings and finally took approval to release ban on import of RBO plants from India. Appreciating the efforts of Secretary Commerce Zafar Mahmood and Chief Executive TDAP Tariq Iqbal Puri, he said that they have taken personal interest towards the value addition in rice trade, which is one of the important source of foreign exchange – APP