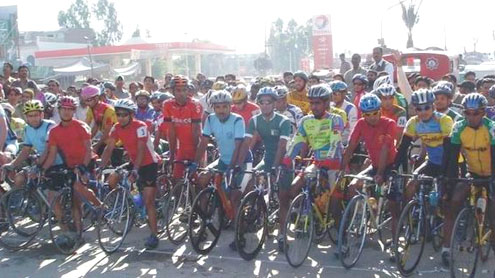 ISLAMABAD: The 16th Tour-de-Pakistan International Cycle Race will commence on March 8-20 from Karachi to Abbotabad. Talking with media, a Pakistan Cycling Federration (PCF) official said that cyclists from India, Afghanistan, Sri Lanka, Bangladesh, Nepal and Africa are also included in the race. He said that nine cyclist form different departments and provinces will also take part from Pakistan.He said the competition will be divided into three stages, in first stage competitors will take start on March 8 and will end on March 11 covering 150 km distance form Karachi to Hyderabad, 163km from Hyderabad to Moro, 150km Moro to Sukkar, and 178km from Sukkar to Rahim Yar Khan.After one day rest on March 12th the race will start again on March 13 and will end on March 16, covering 200 km Rahim Yar Khan to Bahawalpur,90km Bahawalpur to Multan, 154km Multan to Sahiwal, and 160 km distance Sahiwal to Lahore.It will be rest day again on March 17 and race will start again from Lahore on March 18 and will end on March 20th at Abbotabad passing through 115km Lahore to Gujrat, 150km Gujrat to Rawalpindi, and 150km Rawalpindi to Abbotabad.“In this way 1620km distance From Karachi to Abbotabad will be covered – APP

Tajik President due on today