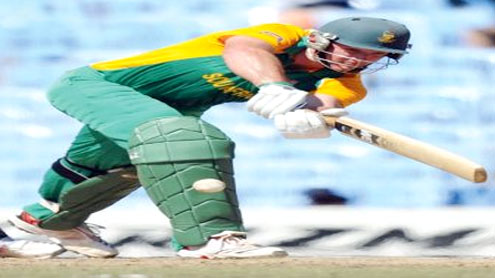 CHENNAI: England revived their madcap World Cup campaign with a dramatic six-run win over South Africa on Sunday, raising new doubts over the Proteas’ ability to close out matches under pressure.South Africa, set just 172 for victory, were bowled out for 165 as England, who only days earlier had been humbled by Ireland, won with 14 balls to spare. Paceman Stuart Broad finished with four for 15 in 6.4 overs, ending the contest when he had Morne Morkel caught behind.The Proteas lost four wickets for three runs to be 127 for seven on a wearing Chidambaram Stadium pitch having been in control at 75 for one as once again Graeme Smith’s men appeared to choke on the big occasion.Earlier, South Africa left-arm spinner Robin Peterson took three for 22, including two wickets in the first over of the match to dismiss England openers Andrew Strauss and Kevin Pietersen.Ravi Bopara, recalled in place of the dropped Paul Collingwood, was named man-of-the-match after top-scoring with 60, equalling his career-best, in England’s 171. With 10 overs left, South Africa needed 30 to win with three wickets remaining. The eighth-wicket pair of Dale Steyn and Morne van Wyk got the target down to 13 off four overs before van Wyk (13) bottom-edged a cut off Tim Bresnan.The Proteas then needed eight off three overs but Broad had Steyn lbw for 20 before removing Morkel. From 124-3, South Africa lost three wickets with no addition to the total. AB de Villiers (25) was bowled by a James Anderson delivery that just clipped the top of the stumps and then Faf du Plessis (17) was run out before JP Duminy was bowled by Anderson for nought. Peterson fell cheaply when wicketkeeper Matt Prior caught him off left-arm spinner Michael Yardy for three. The Proteas had earlier slumped to 82-3 after Graeme Smith (22) and Hashim Amla (42) had enjoyed an opening stand of 63.

Off-spinner Graeme Swann had South Africa captain Smith caught behind after a lengthy review suggested the ball had brushed the left-handed opener’s glove before Amla chopped on to Broad. Broad gave England renewed hope when he had Jacques Kallis edging to Prior for 15, the batsman taking the fielder’s word the ball had carried rather than requesting a review. When England batted, Bopara, in at 15 for three, shared a fourth-wicket stand of 99 with South Africa born Jonathan Trott (52) that ultimately proved vital to the outcome. England captain Strauss fell for nought when he lofted Peterson only to be well caught by de Villiers, running in from deep midwicket – Nation