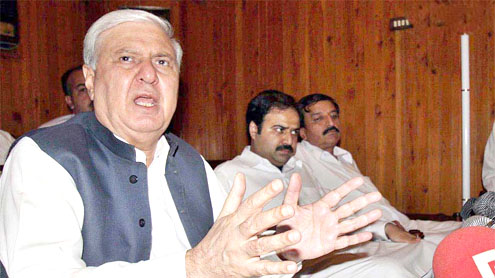 Peshawar: Chairman, Pakistan People’s Party (Sherpao), Aftab Ahmed Khan Sherpao has proposed the formation of task force to adopt measures for industrials and economic revival in Khyber Pakhtunkhwa, while addressing a gathering at Jhanda District Swabi. Sherpao said that at least 307 industrial units had been closed down in the province and the flight of capital on the rise. He added that the proposed task force should devise a ten years plan to revisit the economic policy. He also said that all political parties had made tremendous effort for provincial autonomy however the government had not utilize this opportunity and thus all measures had come to standstill, and alleged thatthe government had no love lost for the public good as its only agenda as plundering national resources.He deplored that the innocent Pakhtuns were being killed since last three years but no efforts were made to stop the killing spree and put them on the path of development.PPP (S) Chief said that the provincial government had received the dues of NFC and foreign fund however, contrary to it the reconstruction in Malakand and rehabilitation of flood affectees had been ignored. He accused that the provincial government had failed to work for the restoration of peace and revamping of financial conditions.He continued that the incident of kidnapping for ransom had increased day byday that intensified uncertainty amongst the masses.

He deplored that the government was unable to ensure protection to the company which was working for oil exploration in karak. Sherpao said that no effort had been initiated for development and curbing the menace of terrorism in the country. He said that high peace council had been constituted in Afghanistan for the peace in the region , while no such efforts were not made in Pakistan.He declared that operation was not the only solution for ending the current turmoil, demanding political initiatives for the present crisis, saying that parliament should workout a road map for peace efforts through dialogue. Sherpao condemned the target killing in Karachi, saying that no body was taking this issue seriously.He said that even the star witnesses of Journalist Wali Khan Babar,s murder had been eliminated. He advised the government to focus on security – Nation