Tajik President due on today 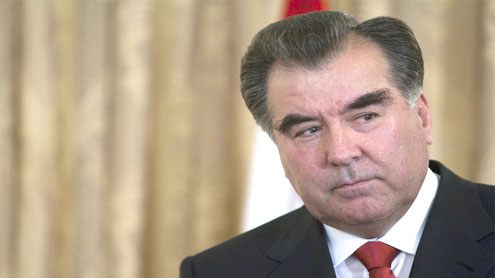 ISLAMABAD: Tajik President Emomali Rahman will arrive here Monday (March 7) on a three-day state visit to hold talks with the Pakistani leadership to further  strengthen bilateral ties and explore new avenues of cooperation.The Tajik President will hold meetings with President Asif Ali Zardari and Prime Minister Yusuf Raza Gilani and is likely to discuss cooperation in hydropower, investment, medicine, education, transport and communication, trade, tourism besides ways to jointly combat international terrorism.The two sides would explore the economic potential for further diversification of their bilateral ties.A formal welcome ceremony will be held at the President House, to be followed by talks. President Zardari will also host a banquet in honour of the visiting dignitary.President Emomali will also visit Karachi. He will be accompanied by a business delegation that will also interact with Pakistani counterparts to explore cooperation between their private sectors.The visit of Tajik President follows the visits of President Asif Ali Zardari in 2009 and Prime Minister Yusuf Raza Gilani in 2010 to Dushanbe.According to a diplomatic source, Pakistan and Taikistan are likely to pursue a trilateral trade agreement with Afghanistan. The two sides will also discuss initiation of a direct flight between the two countries to boost trade and people-to-people contacts between the two countries.The two countries are closely working on the completion of the 6.5 billion US dollar Central Asia-South Asia-1000 (CASA) power project, under which Islamabad will get cheaper electricity after the completion of a 220KV transmission line project. The project will help Pakistan meet its growing demand of energy.Under CASA-1000 high voltage electricity transmission lines will be laid for electricity exports from Kyrgyzstan and Tajikistan to Pakistan via Afghanistan.According to Ambassador to Republic of Tajikistan Zubaydullo N Zubaydov the CASA-1000 project was a cheap source of energy and would cost Pakistani consumers only 5 cents per unit.

It is expected that after the completion of feasibility, tender will soon be floated in the international market for the project.Pakistan and Tajikistan recently inked a Protocol during the 4th session of the Pakistan-Tajikistan Joint Ministerial Commission.The Protocol signed by Minister for Privatization Naveed Qamar for bilateral cooperation in agriculture, education, trade, energy, health, sports, tourism, industry, investment, banking, transport, communication, culture and combating drugs. here have been high level meetings between Pakistan and Tajikistan in the past. During sideline meetings in Turkey and Russia, the presidents of Pakistan and Tajikistan agreed to boost bilateral ties.The tourist traffic between the two countries has significantly increased and the number of Pakistani travellers increased from 505 in 2009 to 810 in 2010 – APP