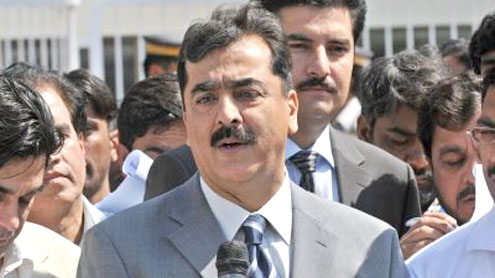 ISLAMABAD: Prime Minister Syed Yusuf Raza Gilani Monday urged the Muslim countries to stand united and enhance economic interaction to help overcome the challenges facing the Ummah and progress and prosperity of their nations.Addressing the inaugural session of the International Seerat Conference, Prime Minister Gilani said the 57-member Organisation of the Islamic Conference needs to be revitalized and made more effective to cope with modern day challenges in all spheres.Prime Minister Gilani said closer economic cooperation would help the Muslim countries to generate employment, better utilise their natural resources and human potential and develop infrastructure and industrial base.He expressed the hope that the international scholars gathered for the event would urged their policy makers to think on these lines and pool their experiences and resources for the mutual benefit of the entire Ummah.The three-day International Seerat Conference is being attended by religious scholars from 14 countries and has been organised by the Majlis-e-Saut-el-Islam.The event was also attended by Minister for Information and Broadcasting Dr.Firdous Ashiq Awan, Minister for Religious Affairs Khursheed Shah and Ulema and scholars from all over the country.Prime Minister Gilani also urged the Ulema not only to gain knowledge in sciences and other subjects, but also to guide the youth in this respect. He directed the Ministry of Religious Affairs in this regard to contact the Madrassahs and the scholars and chart out a course of action.He noted that the youth were not fully aware of the teachings of the Holy Prophet (Peace be upon Him) and needed to be guided by the Religious scholars about the Sunnah and His life and how it positively impacts every facet of life.He expressed the belief that the youth would not only benefit from teachings of the Holy Prophet (PBUH) in their worldly affairs, but also help the country succeed in all spheres and enhance the overall fabric of the society.Prime Minister Gilani said following in letter and spirit the teachings of Holy Prophet (PBUH) was vital for the country and its people to cope with the numerous challenges it was confronting.

It is the need of the times to stand united and face the challenges with a resolve and commitment in the light of the life and teachings of the Holy Prophet Mohammad (PBUH), he said.Prime Minister Gilani also recalled the assassination of former Minorities Minister Shahbaz Bhatti in Islamabad and termed it an attempt to wedge differences between the Muslims and the Christian communities and to tarnish Pakistan’s image.“I strictly warn such elements that they would not succeed through such cowardly acts as the Christian community is patriotic and always ready to sacrifice their lives for the country.”Prime Minister Gilani said religion Islam and the Constitution of Pakistan provides all rights and freedom to minorities. The white portion of the national flag depicts them, as envisioned by Quaid-e-Azam Mohammad Ali Jinnah.He mentioned the incident when the Holy Prophet (PBUH) specially hosted a Christian delegation from Najran and treated them as His private guest. They were allowed to stay at Masjid-e-Nabvi and permitted to perform their religious duties.Prime Minister Gilani said under the prevailing circumstances it was vital that the entire nation stands united by rising above their petty differences and confront all difficulties.He said only by strictly adhering to the teachings of Holy Prophet (PBUH) and following a path of righteousness the nation can succeed – APP