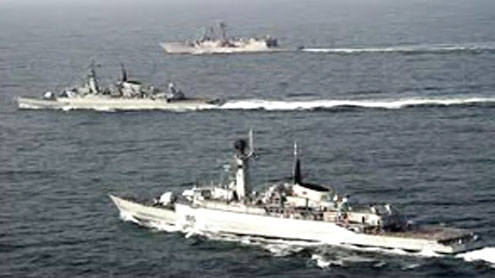 The naval forces of 39 countries, including from the United States, will participate in the Pakistan Navy’s exercise Aman-2011 in the Arabian Sea from March 8 to 11.In a briefing, Commander of the Pakistan Fleet, Vice Admiral Abbas Raza, said that AMAN-2011 naval exercise will help develop a common strategy in the participating forces to fight human and drug trafficking, and terrorism. This exercise will allow the Pakistan Navy to observe the international standards and integrate them into its own naval doctrine.Raza said that the countries like Australia, China, France, Indonesia, Japan, Malaysia, Saudi Arabia, Turkey and Sri Lanka would take part in the exercise. He maintained that improvement in Pakistan-India military relations could not be achieved until normalisation of political relations between the two countries. He said that after Mumbai attacks, a hotline had been established between Indian Coast Guards and Maritime Security – Dunyanews