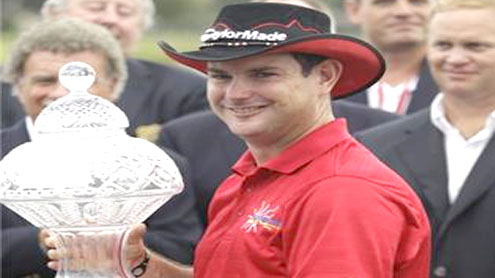 PALM BEACH GARDENS: South African Rory Sabbatini held off South Korean Yang Yong-eun to win the Honda Classic on Sunday, just six months after undergoing cancer surgery. Sabbatini, who had an operation to remove skin cancer from his face in September, made a level-par 70 to finish nine under par overall, one stroke clear of Yang who closed with an impressive 66. Texas-based Sabbatini, who now plays in a cowboy hat to protect himself from the sun, has not won since clinching the Byron Nelson almost two years ago.

“Every win feels like the first one…but this one certainly is very special…it feels like turning over a new leaf,” he told reporters. “Y.E. (Yang) is a fantastic competitor….like a bulldog he’s not going to let you get away easily. I had to remind myself to be patient.” The South Korean, made his push with birdies on the 13th, 15th while Sabbatini wobbled with a bogey on the 14th before recovering with a birdie on the 16th. Just after Sabbatini put his tee-shot on the difficult par-three 17th safely on to the green, the horn blew to suspend play due to lightning in the area. After a 28-minute break, play resumed and with both players making par Sabbatini had a two-shot lead going into the par-five 18th. Yang went for bust, searching for an eagle that would have taken the battle into a playoff, but going for the green with his second shot he found the bunker.

The South Korean, winner of the PGA Championship in 2009, made birdie to put last-gasp pressure on Sabbatini but the South African kept his cool to make par and secure his sixth PGA title. “I have to commend him for being so emotionally stable, I certainly wasn’t,” Yang told reporters. “I really tried to force it to a playoff but Rory had the upper-hand psychologically and technically. He was outstanding and there is only so much you can do,” he said. US Open champion Graeme McDowell had the best round of the day, the Northern Irishman equalling the course record set by Sabbatini earlier in the week with a superb 64 that took him into a share of sixth place – Dailytimes