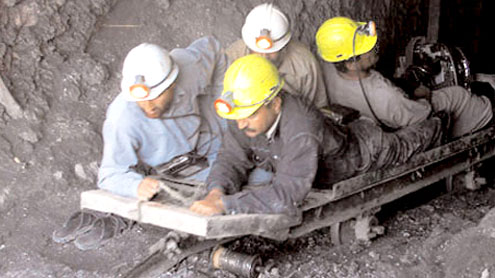 KARACHI: Currently four projects of coalfired power plants are in various phases of execution in Tharparkar district that would produce 2300MW electricity over a period of next four to five years, Sindh Assembly was informed last.Four companies are executing the projects with a total cost of US$4700 million. One of these companies included Sindh Engro Coal Mining working at Thar Block- II, is investing US$3500 million to produce 1200 to 2400MW power; M/s Oracle Coal Mining Company is investing US$450 million to produce 300 to 1100MW power at Thar Block- VI; M/s Couger Energy is investing US$600 to produce 400MW power at Thar Block- III while UCG Projects is investing US$150 million for producing 100MW power.Timeline for all the companies is four to five years, Chief Minister Syed Qaim Ali Shah, who holds the portfolio of Mines & Mineral Development Department, said in written answer to the question by lady MPA Bilquees Mukhtar during question hour.Sindh Law Minister Ayaz Soomro responded various questions on behalf of Chief Minister. To a question by lady MPA Ms. Heer Ismail Soho, the house was told that there are nine developed/delineated blocks in Thar coal field covering an area of 763 sq. km. Out of these, five coal blocks have been allocated to M/s Sindh Engro Coal Mining Company, M/s Couger Energy (UK) Limited, M/s Bin Daen Group of UAE, Planning Commission of Pakistan and M/s Oracle Coalfields PLC UK. Besides, the Coal & Energy Development Department is in the process of offering three more developed blocks in Thar for investment.The house was further informed on a question by Ms. Humera Alwani that as a result of joint venture between Sindh government and M/s Engro Powergen with investment ratio of 40:60, a company ëSindh Engro Coal Mining Companyí has been established, governed by Board of Directors. In first phase, 1200MW coal-fired power plant will be established. At later stage the company is to develop capacity of coal mine from 6.5 MT to 22.5 MT and consequently would establish 4000MW power generation plant for 60 years. An initial investment of US$1.5 billion for mining and US$2.5 billion for power plant will be made.

Sindh Engro Company has recently completed the bankable feasibility study of a 6.5 MT annual coal mining project in a record period of eight months, which will supply coal to 1200MW power plant to be set up by Engro Pakistan Limited. On a question by Arif Mustafa Jatoi, Sindh assembly was informed that joint venture proposal with ratio of 40:60 with M/s Al-Abbas Group is under consideration for establishment of 300MW power plant and washing plant at mine mouth in Badin district. In pursuance of MoU with M/s Al- Abbas Group, an area of 100sq km for each activity was allotted for exploratory work. M/s Al- Abbas Group has to prepare feasibility for establishment of 300MW power plant. The total cost will be 500 million Euro including 150 million Euro for coal mining and 350 million Euro for power plant.The electric tariff will be determined by National Electric Power Regulatory Authority which should be within range of 11 to 11.50 Cents per KWh which is lesser than current RFO-based tariff of 14.18 KWh.

The land required for joint venture will be procured by sponsors. This project will provide regular employment to 500 persons and contractual employment to 500 persons.Responding to a question by Ms. Nusrat Sehar Abbasi and Ms. Heer Ismail Soho, the house was told that at present there is no Central Rescue Station in Sindh however the government is establishing such first station at Thario Halepota near Islamkot in Tharparkar to provide rescue operation at the time of any mishap at mines for recovery of men and material; to provide rescue training to 500 mine personnel etc.Sindh Assembly was told on a question by Ms. Rasheeda Panhwar that a scheme for establishing Rescue Station & Occupational Disease Detection Center at Larkana was approved in 2007 which has been revised in 2010. It will cost Rs.207.932 million. Its civil work is in progress – Dailynews