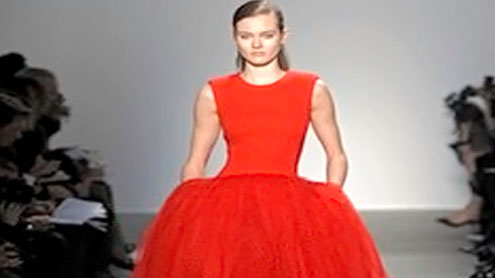 Paris: Giambattista Valli is an erudite Italian designer born in Rome, who has made his home in Paris for over a decade and now makes the most “French” looking fashion that one can imagine seeing in fashion’s most important single capital.His latest collection, staged Monday, March 7, in a medieval hospital ward in central Paris, echoed the sort of silhouettes and sensibilities one associated with elegant, pre-hippie Paris. Yet Valli’s novel use of materials and sense of quirky proportion made the whole aesthetic bright and new.For the fall 2011 season, Valli wants to see women in black and white fur combination coats, done in mixes of shaved mink, sable and goats hair.Valli also has an exceptional eye when it comes to prints – sending out floral patterns that recalled 19th century Flemish dinner services. And his sense of detailing, from twisting ruffles to immense knots of satin linked at the hip of mini skirts, has a rare assurance.His color plate, which he referred to as “thermal colors,” included hot blood oranges, bold canary yellows and electric blues, adding the right dose of pizzazz to this ladylike meditation.Plus his finale was spectacular: a black swan of a dress in acres of tulle and splayed behind model Joan Smalls. Four assistants were needed to twist the train through a narrow passageway on to the catwalk. Like the collection it was a complicated moment but, ultimately, also one of great charm – Yahoonews