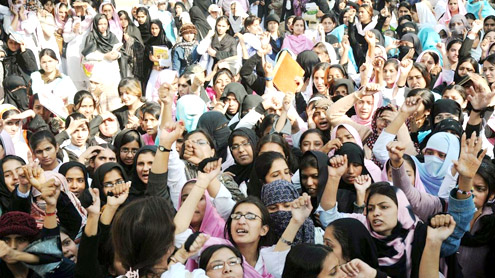 PESHAWAR: Students of various educational institutions of Lower Dir on Tuesday criticised the government for making false promises concerning provision of financial support to them and other people of their militancy- and flood-affected area.Speaking at a press conference at Peshawar Press Club, the students led by one Nasrullah Khan, said that Dir was a backward area where people had already been lacking basic facilities. They said that militancy and floods had piled up miseries for them.Mr Khan said that the government had promised to financially support people of the affected localities, but it was favouring political activists only and ignoring the common people.He said that due to repeated problems in the wake of militancy and floods, the students with meager finances could only get admission in the evening shifts. However, all such students of evening shifts are now facing hostel problem, as there is no facility available to them, he said.Mr Khan said that it was the duty of the government to support the students otherwise they would not be able to continue their education. He also pressed the non-governmental organisations (NGOs) to provide jobs to the local educated youths instead bringing in non-local staff.

The students’ representative said that the hiring of non-locals for working in Dir was an injustice with the jobless educated youth of the area. He said that neglecting the local people was the violation of community development rules and demanded for an immediate halt to the discriminatory attitude of the NGOs.The students demanded of President Asif Ali Zardari and Prime Minister Yousuf Raza Gilani to resolve problems of the area people and provide them justice – Dawn