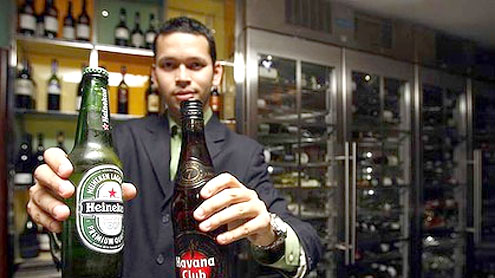 DUBAI: The duty-free shop at Dubai’s glitzy international airport brims with travelers choosing from row upon row of carefully stacked wine, champagne and whisky.The lavish display highlights a push by major alcoholic drinks-makers into the Gulf Arab region, lured by a vast youth population and large expatriate community whose taste for alcohol remains undaunted by the heavy restrictions imposed on drinkers in Muslim countries.”I almost always walk out from the Dubai airport with an expensive bottle of whisky,” said James Wilkinson, an Australian national, who regularly travels to the region.Islam prohibits the consumption of alcohol and most Gulf countries strictly control the substance — if they don’t ban it altogether — by making it illegal to drink alcohol openly.Regional “dry” states like Saudi Arabia and Kuwait have strict laws against drinking. Many expatriates and locals rely on a large black market for alcohol and the occasional binge-drinking trip to Dubai or Bahrain.

In the United Arab Emirates, the most liberal of the Gulf states, foreign residents may obtain permits to buy alcohol from a handful of designated liquor stores where bottles are sold at premium rates. It is also freely available in licensed hotels and pubs.Other Gulf Arab countries like Qatar and Oman also permit alcohol sale but only in top hotels.Diageo Plc, the world’s largest spirits company, opened a luxury spirits, fine wine and champagne sampling area at Dubai airport in December last year, the first of its kind, to attract well-off travelers with a taste for premium brands.”The Gulf is an important market for us to continue growing,” said Jane Ewing, Diageo’s general manager for the Middle East and North Africa (MENA) region.The London-based maker of Johnnie Walker whisky and Smirnoff vodka posted a 16 percent rise in regional net sales last year and expects sales to double in the next five years in the MENA region. The Gulf Arab region alone accounted for 44 percent of Diageo’s total sales in MENA, with the United Arab Emirates and Lebanon being its two largest markets.

Diageo’s premium brand Johnnie Walker Blue Label Scotch whisky, priced above $200 a bottle, is selling fast off the shelves in the Gulf.As the Gulf Arab region slowly recovers from the global economic crisis and property slump, tourists are starting to return to hotels and resorts and alcohol producers are keen to catch a share of the beverage business.This also means a heavy presence in discreet Dubai liquor stores aimed at residents with alcohol permits while the Dutch firm Heineken NV says sponsorship of European football has raised its profile in the Gulf.”Heineken is one of the main sponsors of the UEFA Champions League, which is watched around the world and also very popular in Arab countries,” said John-Paul Schuirink, financial communications manager for Heineken, adding that associating with soccer was a way to reach customers in the Middle East.

Targeting observant Muslims with non-alcoholic drinks is also a key strategy albeit a tougher sell for companies whose names are synonymous with beer or hard liquor.Heineken credits its mix of drinks – such as fruit-flavored malt-based drinks popular among youth as a beer substitute – for its expansion into the Middle East and North Africa market.It has a 40 percent market share in the United Arab Emirates, 70 percent in Lebanon and 90 percent in Egypt.For the brewer, the Gulf Arab market is a small but profitable one, with a limited number of competitors amid a growing expatriate population.As more international sporting and entertainment events take place in the Gulf – the region is already on the global sporting calendar for Formula One, tennis, golf and horse racing – alcoholic drinks makers see more opportunity for market growth.”The vision of many Gulf states to become increasingly important in the world market through significant events opens business opportunities for us,” said Diageo’s Ewing.

“We have already begun talks with the Qatar duty free and hope to have a good presence in the new airport.”Qatar, a tiny gas-rich Gulf Arab state last year won the right to host soccer’s World Cup in 2022 and now faces questions on how the Muslim country will cope with the influx of fans, many of whom are used to drinking as part of the experience.Qatar, in addition to a new airport, hotels and other facilities, has also promised concessions for alcohol consumption, including special fan zones around the stadiums and licenses allowing restaurants to serve alcohol during the games.”Every country has its own restrictions….we adhere to them and respect sensitivities,” said Diageo’s Ewing, on the impact of religious restrictions on alcohol in the region, adding they have been no hindrance to doing business.

Despite brisk sales, the religious and social taboo linked to alcohol consumption makes for an uneasy balance in a region where alcohol-related infractions result in severe legal action.Newspapers are filled with reports of public drunkenness leading to jail terms for expatriates as well as tourists, particularly in glitzy Dubai where hotels entertain customers with their best spirits.Recently, a 37-year-old British tourist who went to the police station to report the loss of his passport at a Dubai-based bar was arrested for illegally consuming alcohol — since he was not a resident and had no alcohol license, he should not have been in the bar, prosecutors argued.”Dubai is struggling between upholding the Islamic laws while trying to project the UAE brand to be associated with openness,” said Marco Blankenburgh, international director for Knowledgeworkx, a UAE-based consulting firm that specializes in cross-cultural issues.”The law is not always clear but expatriates and tourists have to remember that they are in a Muslim country – Yahoonews