Balki to reluanch Sridevi. Time for No Entry Mein Entry 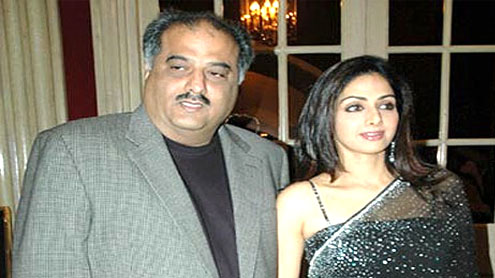 Boney Kapoor can breathe a sigh of relief. Now that the responsibility of launching his beautiful wife Sridevi has been passed on to Balki, Boney is itching to go ahead with the all-boys tale.Secretly the script for the sequel to No Entry has been readied by Anees Bazmi. All the while even as he has been completing the direction of two back-to-back films Anees Bazmi has been writing the No Entry sequel.Having come to a deadend the first time this time he doesn’t want to reveal details about the sequel.But we can safely say No Entry Mein Entry will have lots of incidents and situations related to Salman and Akshay Kumar, the two superstars that Anees has been working with.The characters in No Entry Mein Entry have grown out of Anees’ close contact with the leading men in his two under-production films Thank You and Ready.Apparently a lot of characters traits, body language and speech pecularities of the protagonists in the No Entry sequel will be based on Anees’ observations on Akshay Kumar in Thank You and Salman in Ready.

In fact, Anees has even taken incidents related to Akshay and Salman and made them part of No Entry Mein Entry.Cautious about giving away the real-life inspirations for No Entry Mein Entry Anees says, “I’m a writer first then a director. Observing people from close quarters the quirks and characteristics of people I’ve been working with lately are bound to show up in No Entry Mein Entry. ”Don’t be surprised if Anil Kapoor, Salman Khan and Fardeen Khan in No Entry Mein Entry end up talking and behaving like Akshay, Bobby, Irrfan, Salman and the other actors Anees has been hanging out with.The delay in the No Entry sequel, it can now be told, was due to Bazmi’s attempts to carry the characters and situations from No Entry forward into No Entry Mein Entry. The effort proved non-productive and abortive as Anees was stuck with trying to create a comic ambience for the three heroes of No Entry within an already-given situation.Having scrapped the original idea of carrying the same story and characters forward, No Entry Mein Entry will now have completely fresh characters.Informs Anees, “We’re only using the title No Entry. And the three heroes. Everything else is different. No point in carrying the same story forward. ”Any wonder that Boney Kapoor’s other pet project Mr India 2 is not going anywhere? The characters are too plot-specific to be placed in another situation – Santabanta