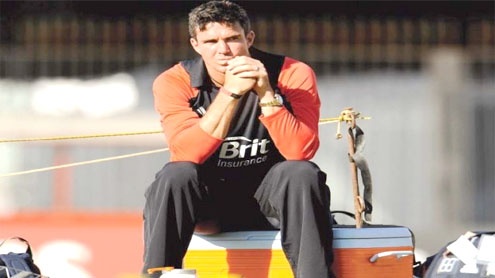 CHITTAGONG, Bangladesh: Rattled Bangladesh tackle resurgent England in a make-or-break Group B match on Friday where defeat will almost certainly end their World Cup campaign before the quarter-finals.The Tigers have just one win in three games and failure at the Zahur Ahmed Chowdhury stadium will mean they’ll have just a slim chance of advancing to the last eight from a group that includes India, South Africa and the West Indies.England, who resurrected their campaign with a six-run win over South Africa on Sunday, will qualify if they beat Bangladesh and the West Indies down Ireland in Mohali earlier on Friday.Bangladesh, who began the tournament ranked eighth in one-day cricket, have played uninspiring cricket so far, leaving millions of their fans angry and frustrated.The Tigers crashed to their lowest one-day total of 58 against the West Indies in Dhaka last Friday, losing the game by nine wickets in the first session itself.

Memories of a dream run in the Caribbean four years ago, when they knocked out India in the first round and then stunned South Africa in the Super Eights, have faded.Bangladesh have been let down by their batsmen, whose form deserted them after a brave, but unsuccessful chase of India’s 370-4 in the opening match when they replied with 283-9.They were shot out for 205 by Ireland, fought back to restrict the non-Test nation for 178 under the Dhaka lights, before hitting a new low against the West Indies.Opener Tamim Iqbal and captain Shakib Al Hasan are the only batsmen to score half-centuries in the tournament, both against India.Spin spearhead Abdur Razzak has managed just one wicket in three games at a cost of 112 runs. Left-arm spinner Shakib has three and off-break bowler Naeem Islam two.

Batsman Junaid Siddique said the team looked forward to a fresh start against England.”We don’t want to remember the past and want to look forward,” he said. “There are no negative feelings at the moment. If we play to our potential we can beat anyone.”Bangladesh face an England team reeling under the twin blows of losing star batsman Kevin Pietersen and fast bowler Stuart Broad for the rest of the tournament due to injuries.The duo have been replaced by fluent left-hand batsman Eoin Morgan and giant fast bowler Chris Tremlett, who are both available for Friday’s game.Andrew Strauss’ men will be buoyed by their impressive run against Bangladesh, having lost just one of their 14 one-day internationals so far.Significantly, England have also won all their six contests on Bangladeshi soil, the last three in March, 2010.England must find a new opening partner for Strauss in Pietersen’s absence, with Ian Bell, Ravi Bopara and wicket-keeper Matt Prior the likely candidates.Morgan, 24, was confident England will overcome the absence of Pietersen and Broad.”To lose two world-class players in Kevin and Stuart is going to be a big loss,” the former Irish World Cup star said.”But in the past — like we have seen in the recent Ashes series — guys have come in and filled other guys’ places, done very well and we have gone on to do exceptionally well – Yahoonews