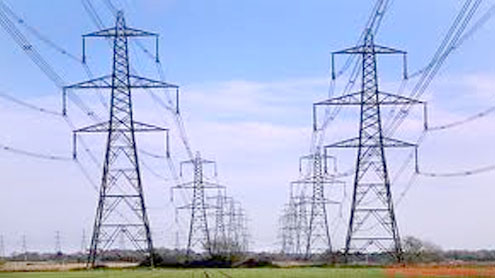 QUETTA: The National Transmission & Dispatch Company (NTDC) officials said that some unidentified terrorists have blown up two transmission lines (towers) with explosive material in an area of Chattar Filgaee, while the supply of electricity has been suspended in several areas.The informed sources of NTDC has said that the incident of explosion of two electricity towers occurred on the night between Wednesday and Thursday, when some unidentified radicals blew up the transmission lines. The lines of 220 KV power were located at the site of Guddu Sibbi Dire circuit and Ouch Sibbi circuit, and bearing location number 454 and 455 respectively.As a result, both the towers been dashed to the ground and the supply of electricity has been suspended.Meanwhile, in a press release the official of QESCO also informed that the suspension of electricity, shortage of power has been increased in the adjacent areas of Chattar Filgaee. It is worth mentioning here that the electricity of two units from a local private power house has already been suspended since one and half month. Therefore, only 260 Mega Watt (MW) power is available at present, and the total shortage of power at QESCO grid station has been escalated upto 1100 MW, which is 18 to 20 % of the total production at the Grid Station.At present, after this incident the duration of power outage has increased in Quetta city, and the rural areas have been receiving electricity only 6 hours daily. Meanwhile, the QESCO officials have contacted to the NTDC officials on emergency basis for the repairing of towers – Onlinenews