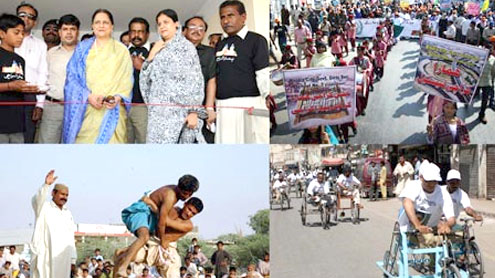 KARACHI: Karachi, the port city and economical hub of Pakistan, was earlier known as the city of lights in the world but now it has turned infamous for target killings and ethnic clashes. However, the Hamara Karachi Foundation (HKF) took another initiative to bring its lights back by launching a series of celebrations under the Hamara Karachi Festival.A large number of colorful exhibitions, cultural programmes, contests, Mushairas and fireworks displays were organised in all 18 towns of the metropolis under the nine-day festival that concluded here on Sunday.The festival commenced with a solidarity walk at the Mazar-e-Quaid. During the festival various programmes were organised to promote the traditions of the metropolis. In this regard, a cycle race was held from the Civic Centre to the Karachi Municipal Centre building on Sunday morning in which about 60 cyclists participated and in this race, all the three positions went to the participants of Lyari Town.

Another interesting event was donkey carts race, which started from Gulbai and concluded at the Kothari Parade Clifton. The participant Peeral stood first in the race by covering a 13 km long distance in only 18 minutes and was awarded Rs 10, 000.Speaking on the occasion, former City Naib Nazma Nasreen Jalil vowed to promote such type of traditional races and termed them a pride for Karachi city.As flower is one of the most pleasant objects on the earth, which brings happiness and joy to human beings, a very graceful flower exhibition was also organised at Nasir Hassan Shaheed Park. Beautiful fireworks displays were also held in several towns.Food festivals and children’s display shows were also organised in some towns, particularly in Gulshan-e-Iqbal Town in which children entertained families related programs.Interfaith evening and W-11 mini bus shows were also appreciated by a large number of citizens. The last program of the festival was a cultural performance program held near Bagh-e-Qasim in which renowned classical dancer Sheema Kirmani and cultural delegations from Indonesia and Saudi Arabia also performed.

Besides all these programmes, a large number of other activities, including sports tournaments and Mushairas, were also held. With the grace of Hamara Karachi Festival, students of schools throughout the city would enjoy free entry in the Zoo of the metropolis through out the remaining year.HKF President Nasreen Jalil said that the festival was organised to create a peaceful environment in the city in which Karachiites could enjoy their lives and remove negative effects of terror in their mindsets. She said that literary, intellectual and arts relating activities teach them to love humanity and hate terrorism.A large number of citizens participated in the events organised under the festival. Sindh government and city’s town administrations fully supported the celebrations of the festival. In overall, Hamara Karachi Festival was a marvelous activity, she concluded – Dailytimes