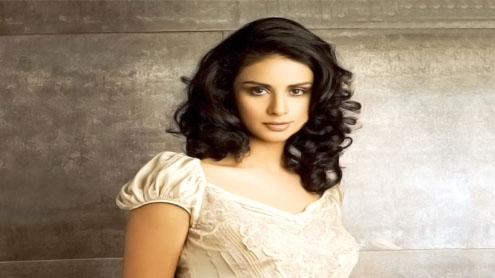 PANCHKULA: Going against the set notion of big fat Punjabi wedding, Bollywood diva Gul Panag on Sunday tied the nuptial knot with Gurshwinder Singh Attari aka Rishi in a low key wedding. The marriage was solemnized in a gurdwara in close friends and family were invited.While Gul was dressed in a pink lehenga with heavy necklace and earrings, turbaned Rishi wore a designer sherwani. When the wedding ceremonies were being held inside the gurdwara, those present made it a point to capture the special moments in their cameras. Be it bride’s brother or relatives, all were seen capturing these special moments in their cameras.After the ceremonies were over, the granthi blessed the newlyweds and offered them prasad.The near-and-dear ones wished them a beautiful life ahead. The wedding was just like any other Punjabi wedding but the Jai- Veeru (or Munnabhai-Circuit) style of parting from the gurdwara caught the attention of onlookers.Instead of sitting inside a swanky decorated car, the couple preferred to ride the Enfield bike with a sidecar. Rishi, a commercial pilot, took the driving seat, Gul made herself comfortable in the sidecar for their brief journey till the hotel that was the luncheon venue.”How did you like it?” asked Gul, dressed in a pretty pink shaadi ka joda. ”I want to ride a bike, but let me act like a shy bride,” joked Gul.Sporting a turban, Rishi started the bike and made the sarwala sit with him.When Gul was asked about her plans for the future, she said, ”Enjoy, enjoy and enjoy.”The couple was ecstatic cruising on the Panchukla roads. Traffic came to a standstill as many people on the road wondered what the newlyweds were up to. TV actor Shruti Seth, Koel Puri, ‘Turning 30’ director Alankrita Shrivastava along with designers Mandira Wirk and Urvashi Kaur were also there.But they all left for Delhi the same evening. Sources say Subrata Roy Sahara had also been there – TOI