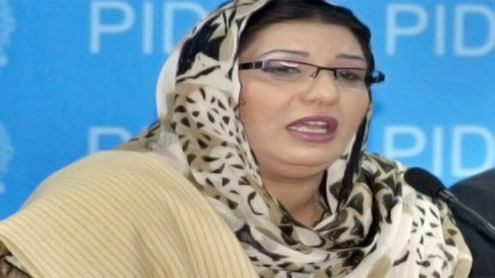 ISLAMABAD: The Federal Cabinet was informed on Monday that inflation rate during the past three months has fallen from 15.6 per cent to 12.9 per cent. Briefing media persons after the Federal cabinet meeting chaired by Prime Minister Syed Yusuf Raza Gilani, Minister for Information and Broadcasting Firdous Ashiq Awan said that the cabinet was also told that external financing during past six months has fallen from 375 billion to 80 billion which is 79 pc reduction. The minister said that Secretary Finance briefed the Cabinet about reasons of inflation which include global recession and price hike of food and non-food items.“Ministry of Information in collaboration with Ministry of Finance would share detailed information about increase in consumer price of commodities with media soon,” the minister said.  To a question, the minister said that PPP leadership always followed politics of reconciliation.She said that President Zardari not only telephoned Mian Nawaz Sharif to inquire about the health of his spouse, but also directed the Pakistan High Commission to receive him at the airport. She said that despite political differences, we have to keep national interests over political interests.

“No doubt there are hurdles in the way of politics of reconciliation, but we have to overcome these hurdles”, the minister said.To another question, she said that Pakistan Peoples Party (PPP) has given sacrifices for the sovereignty of institutions and restoration of superior judiciary was part of the party manifesto.  Ruling out chances of collision among state institutions, she said that all institutions should work under their parameters.The minister said that China has offered to sell six submarines to Pakistan, and the Cabinet has given go ahead to the Ministry of Defence to hold talks however before preparation of feasibility report no further comment was possible.About Mutahhida Qaumi Movement (MQM), she said it was an ally of the PPP and the government was trying to take all political forces along, and MQM cannot be ignored.They are not quitting Sindh government and at Federal level they have some reservations, which would be removed soon and the nation would hear good news in this regard.While replying to a question she said that Prime Minister has said that in the changed scenario in Punjab, the PPP will get a chance to play constructive role as opposition.She said that protest over horse-trading in the province was a democratic right.

She said that all institutions are in the process of evolution and no person believing in democracy can think of insulting other’s mandate.On the issue of US citizen Raymond Davis, she said that court will decide the matter of immunity and no discussion was held on the matter as it is subjudice.Dr Firdous Ashiq said that PPP was as patriotic as any other party, and would continue to represent the masses sentiments.About President’s address to the Joint Sitting of the Parliament, she expressed the hope that all political forces would follow the parliamentary traditions.Minister for Information Firdous Ashiq Awan said the cabinet expressed deep solidarity with the earthquake victims of Japan and assured the people and government of Japan that people and government of Pakistan are with them in this hour of trial.She said that the government of Pakistan is ready to help Japanese people and would dispatch medical relief, mobile hospitals and all available resources to them.Dr. Firdous informed that two C-130 planes are ready to leave for Japan and are awaiting clearance to leave.She remarked that Pak-Japan friendship is time-tested as Japan has always helped Pakistan in the hour of need.

“We are part and parcel as we have strong bonds of strategic and economic ties,” she said.
The minister said the cabinet also reviewed the implementation of its decisions by the ministries and no pending work should be left.The recommendations of Economic Coordination Committee (ECC) were fully endorsed by the cabinet, she added.She informed that the cabinet also reviewed some Memorandums of Understandings (MoUs) with different countries.These MoUs include the purchasing of conventional submarines from China which is part of defence cooperation between the two countries, she added.
The minister informed mediamen that after consultations between the two countries, Pakistan will purchase six submarines from China.The other MoUs include Pak-Turkey co-operation for the promotion of youth exchanges and establishment of joint cooperation with Ukraine.The cabinet also discussed the enhancement of arts and creative study with Sri Lanka, she remarked.About Kerry-Lugar Bill, the minister informed that the cabinet has ratified the Bill under which the US would provide $1.5 billion annually and $7.5 billion in five years time.

She informed that the cabinet also proposed amendment in Bar Council Act, 1973 under which anyone can provide direct financial support to the bars in the country.Dr. Firdous said that the Cabinet was also briefed about the Libyan crisis and it was informed that till now 4,900 Pakistanis have been safely repatriated.The minister told that Minister of State for Foreign Affairs Hina Rabbani Khar briefed the Cabinet about the recent meeting of the Gulf Cooperation Council which supports Pakistan’s vision for peace in the region.She said that the Prime Minister informed the cabinet about the political situation in the country including the issue of Seraiki province.The Prime  Minister asked the Cabinet Ministers to highlight the three years performance of the PPP regime and advised them to take part in Minister online programme so that the masses could directly question them – APP

Pakistan’s exports to Germany increased by 23% in 2010

Pakistan’s exports to Germany increased by 23% in 2010