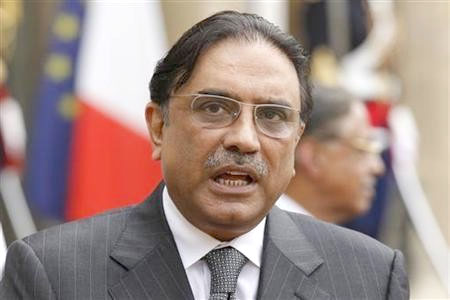 KARACHI: President Asif Ali Zardari has called for enhancing gas supply from existing gas fields and reactivating  the abandoned gas field in the province to meet country’s requirements. He was presiding over a meeting which discussed matters relating to abandoned gas fields in the province at Bilawal House here on Monday. Sindh Chief Minister Syed Qaim Ali Shah and provincial ministers and advisors also attended the meeting.Media Coordinator of Sindh Government Taj Haider, while briefing the newsmen about the meeting, said that six, out of nine dormant gas fields are in Sindh.The President asked the authorities to make policies to attract private sector investors for setting up power plants near these gas fields to generate electricity. Similarly, industrial estates should also be set up near the gas fields, he said.

He was apprised  that the quality of  gas from the fields was not suitable for domestic consumers, but ideal for power generation. Nur and Bagla fields are located in district Thatta, while Jhakro in Sanghar and Sara West in district Ghotki.These gas fields are abandoned for various reasons including expiry of lease, ownership right under 18th Amendment.President Zardari asked  the Sindh government to seek  cooperation of private sector for developing these gas fields as early as possible.About the small hydel projects on canals, the President was informed that power projects on these canals can produce 178 MW of electricity on an average.He asked Sindh government to design new hydel policy to attract hydel projects in the province – APP