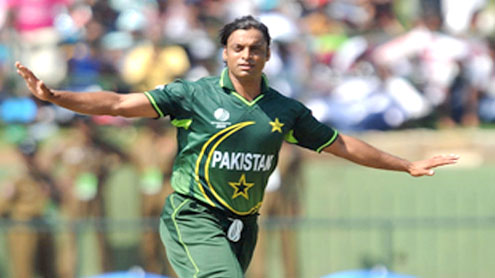 Shoaib Akhtar will retire from the international game at the end of Pakistan’s World Cup, bringing to an end one of cricket’s most compelling and mercurial careers. He told his Pakistan team-mates of the decision at the Premadasa Stadium on Thursday morning, during an emotional gathering in which he delivered a farewell speech and was embraced by fellow players and support staff.

Privately, over the last few months, Shoaib had been looking at the World Cup as a final hurrah for a body increasingly unable to cope with the rigours of the international game. The tournament itself has been a mixed one for him: he was outstanding through ten overs in Pakistan’s win over Sri Lanka. But after an impressive opening spell against New Zealand he was taken for 28 runs in his final over, bowling a succession of waist high full tosses at Ross Taylor as New Zealand changed the game.

He was dropped for the subsequent Zimbabwe game – having earlier been rested in the game against Canada – and it was as much for his performance as continuing concerns over his ability to be at optimum operation in his second and third spells.Shoaib made his first international appearance in December 1997, against West Indies. He shot to fame in 1999, when he bowled Rahul Dravid and Sachin Tendulkar in 1999 in the Asian Test Championship game against India, and continued that form into the World Cup where he was one of Pakistan’s most effective bowlers. But since then, issues pertaining to his action, discipline and injuries severely curtailed his career. In a little more than 13 years in international cricket, Shoaib managed just 46 Tests, but performed impressively, picking up 178 wickets at 25.69. He was a more regular feature in ODIs as Pakistan’s spearhead, and picked up 247 wickets at 24.97 – Espncricinfo