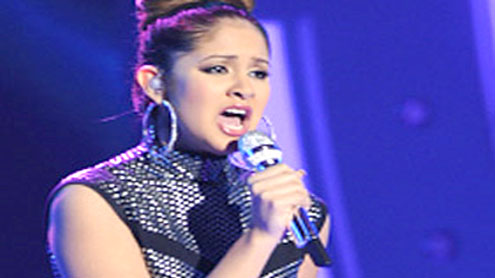 LOS ANGELES: “American Idol” viewers are saying adios to Karen Rodriguez.The bubbly, bilingual 21-year-old wannabe diva from New York, who crooned Taylor Dayne’s “Love Will Lead You Back” in English and Spanish on the Fox talent competition Wednesday, was revealed Thursday to have received the fewest viewer votes. The judges decided against saving her following a last-chance performance of Mariah Carey’s “Hero.””It just felt great to at least have that one chance,” Rodriguez said after her swan song.

Haley Reinhart, the 20-year-old college student from Wheeling, Ill., who belted out Whitney Houston’s “I’m Your Baby Tonight” while smudging her lipstick, and Naima Adedapo, the 26-year-old dance instructor from Milwaukee who delivered a pitchy rendition of Tina Turner’s “What’s Love Got to Do with It,” joined Rodriguez as the bottom three vote-getters.Before the elimination, the top 12 finalists plowed through a mash-up of Steppenwolf’s “Born to Be Wild” and Lady Gaga’s “Born This Way.”The Black Eyed Peas later dedicated a performance of “Just Can’t Get Enough” to their “friends in Japan,” and last year’s “Idol” winner Lee DeWyze offered advice to this season’s brood after singing “Beautiful Like You.”

“Just remember why you tried out in the first place,” DeWyze told the contestants. “At the end of the of the day, no matter when you leave, you still love music, and you’re gonna keep doing it. You guys are fine no matter what happens.”The other remaining finalists are Casey Abrams, 20, of Idyllwild, Calif.; Lauren Alaina, 16, of Rossville, Ga.; James Durbin, 22, of Santa Cruz, Calif.; Stefano Langone, 21, of Kent, Wash.; Jacob Lusk, 23, of Compton, Calif.; Scotty McCreery, 17, of Garner, N.C.; Paul McDonald, 26, of Nashville, Tenn.; Thia Megia, 16, of Mountain House, Calif.; and Pia Toscano, 22, of Howard Beach, N.Y – Yahoonews