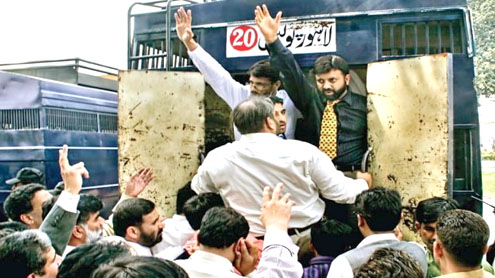 LAHORE: Around 100 PCS officers were arrested, and an FIR was registered against 200 of the same cadre on Friday, which is certainly for the first time in history of Pakistan when the District Management Group officers and the provincial ones have reached a stage of an open clash.Arrests of the PCS officers started when they staged a protest inside the Civil Secretariat over the alleged arrest of their colleagues. Upon this, the police was called and arrests were made, which is being considered as a case where one tier of government has arrested the other.Four lady officers Tania Malik, Shumaila Manzoor, Uzma, and Robina were also arrested besides President of the Association Rai Manzoor Hussain Nasir, Additional Home Secretary Dr Shoaib Tariq Warraich, Director PESSI Ch Afzal Ahmad, Deputy Secretary (Regulations) S&GAD Abdul Malik Bhulla, Deputy Secretary Cabinet Wing S&GAD Saghir Ahmad Shahid and others.

As per sources, the Punjab government is mulling over two options to deal with the protesting officers; first, issuing show-cause notices to these officers, and secondly, notifying terminations of other officers resorting to protests.On the other hand, the Association is planning to stage a sit-in and protest outside the Civil Secretariat on Saturday (today) for which initial message has been sent across the province to the PCS officers. The administration pundits believe that the machinery could cripple because of the PCS officers’ absence. The Association has also decided that no officer would apply for bail and the remaining officers would court arrests.A spokesman of the Punjab government has said some provincial officers were taken into custody due to threatening the staff, locking the offices and interfering in the official work.According to a press release, some provincial officers tried to distribute pamphlets of illegal strike, upon which, security officials stopped them, but they called for their colleagues, threatened the secretariat staff, locked their rooms and forced them to support them. “Upon this, the government took some officers into its custody taking action against them as per law. After that, the work continued in the Secretariat as per routine,” the spokesman concluded – Nation