Pre-feasibility of Pak-Turkish train by April 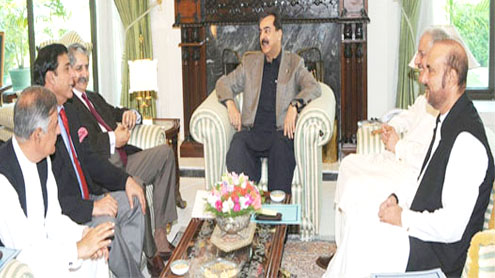 KARACHI:  The proposed Gul Train between Islamabad and Turkey, named after the Turkish President, moved a step forward as a Turkish delegation led by Prof Dr Guven Sak, head of Economic Policy Research Foundation of Turkey called on President Asif Ali Zardari in Bilawal House here Friday and said that pre-feasibility study of the project would be completed ahead of President Zardari’s forthcoming visit to Turkey in April. Turkish Ambassador in Islamabad Mustafa Babur Hizlan was also present in the meeting.The Pakistan side included Chairman BOI Saleem Mandviwala, Deputy Chairman Planning Commission, Secretary to President Malik Asif Hayat, General Manager Railways and Spokesperson to the President Farhatullah Babar.Briefing journalists the spokesperson to the President said Guven Sak who had already held meetings with the Board of Investment, Railway officials, private entrepreneurs and the Stock Exchange ahead of meeting the President described the project as “doable”.

The President said that equity for the project may be raised through the Stock Exchange and leading international companies of repute in the business of infrastructure development also associated. He said that during his visit to Japan he found that Japanese entrepreneurs were keen to consider participation in the project.The President said that he had suggested to the Turkish President that the project we named after him as Gul Train.  He said that the project will boost trade between Europe, Middle East and Pakistan and which can subsequently be extended to other countries of Central Asia.Farhatullah Babar said that the President also suggested that stock exchange and the Chamber of Commerce of Turkey may negotiate with the stock exchange in Pakistan on the platform of ECO Secretariat for establishment of a holding company and subsequently the setting up of joint ventures to take over the commercial management of the cargo train – APP