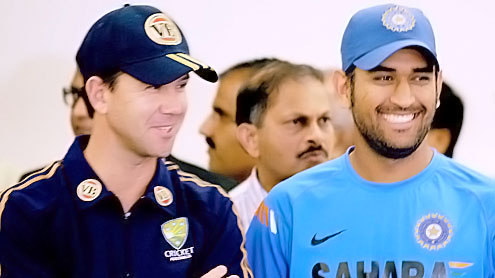 India will play defending champions Australia in a mouthwatering World Cup quarter-final clash after the hosts battled back to beat the West Indies comfortably on Sunday.India scored 268 thanks largely to a century by in-form Yuvraj Singh but lost their last six wickets for just 36 runs, raising fresh concerns over their ability to make the most of strong starts by their powerful top order.But the West Indies, who had made a strong start to their reply in Chennai thanks largely to 81 from Devon Smith, crumbled alarmingly from a promising position of 154-2 to 188 all out, handing India victory by 80 runs.West Indies’ last seven batsmen mustered a feeble 15 runs between them with a top score of six as they were bowled out with seven overs remaining. Zaheer Khan was the pick of the Indian bowlers, with 3-26. Yuvraj took 2-18.Their disastrous collapse echoed a speedy demise against England, adding to growing doubts over the ability of the West Indies to perform under pressure. They have not beaten a major nation in a one-day international since 2009.

Man-of-the-match Yuvraj’s maiden World Cup century helped revive a 38,000 capacity crowd at Chidambaram Stadium who had been stunned into silence by the early loss of Sachin Tendulkar.With the pressure of having to win to qualify off for both teams, many hoped to witness cricket history by seeing Tendulkar score his 100th international century in the concluding Group B match.But Ravi Rampaul, who took five wickets, had him caught behind for just two off the last ball of the first over.Australian umpire Steve Davis rejected Rampaul’s raucous appeal but a sporting Tendulkar walked off anyway.The India-Australia quarter-final will take place in Ahmedabad on Thursday with the West Indies playing Pakistan in Dhaka a day earlier.In other ties, New Zealand will face South Africa in Dhaka on Friday and Sri Lanka play England in Colombo on Saturday.‘We will be at our best for the quarter-finals,’ said India captain Mahendra Singh Dhoni.‘Australia are a very strong side and very expressive on the field. But it’s about how we prepare for the game to achieve what we want.’

West Indies captain Darren Sammy admitted that his men will need a radical improvement against Pakistan.‘We are in the knockout stages and that was our first objective,’ said Sammy.‘But we need to bring our A-game against Pakistan. We will have to pick things up.’Australia were licking their wounds after seeing their 34-match unbeaten streak in the tournament stretching back to the 1999 edition ended by Pakistan on Saturday in Colombo.Australian captain Ricky Ponting reignited the walking debate at the World Cup after admitting he stood his ground despite knowing he had been caught behind in the Pakistan match.

Ponting, on 19 at the time, was given not out by the on-field umpire but the decision was overturned on review.‘There were no doubts about the nick, I knew I hit it, but as always I wait for the umpire to give me out. That’s the way I’ve always played the game,’ he said.Ponting’s admission came just a day after a similar controversy in Mumbai when Sri Lanka vice-captain Mahela Jayawardene and Kiwi off-spinner Nathan McCullum clashed over a ‘clean’ catch.In the earlier Group A match on Sunday, Zimbabwe crushed hapless Kenya by 161 runs in Kolkata. Zimbabwe posted 308-6 and Kenya, who have lost all six of their matches at the World Cup, slumped to 147 all out.Both African nations were already out of contention for a place in the quarter-finals.International cricket chiefs Sunday approved New Zealand’s Daryl Tuffey as a replacement player for the injured Hamish Bennett – Khaleejtimes