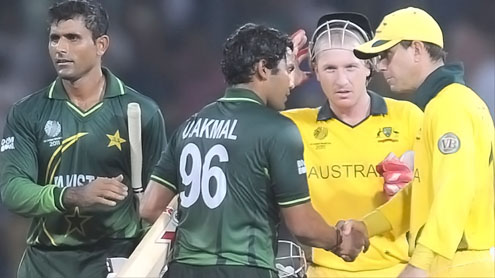 Pakistan ended Australia’s 34-match unbeaten run at World Cups with a tense four-wicket victory in Colombo to secure top spot in Group A.Ricky Ponting’s side looked out of sorts after choosing to bat, crumbling to 176 all out with Umar Gul (3-30) and Abdul Razzaq (2-8) impressing.Brett Lee took 4-28 in reply to test Pakistan’s nerve but Umar Akmal saw them home with an unbeaten 48.The defeat was Australia’s first at a World Cup since 1999.Pakistan were the victors that day at Headingley too and it was fitting that Abdul Razzaq, the only man in their team to play in both games, should hit the winning boundary.Not always the most consistent of sides, Shahid Afridi’s men were fully focused on this occasion, especially so after an incident during the Australian innings when several players were involved in a heated exchange with Australia’s Brad Haddin.And while Pakistan appear to be coming good at the right time once again, Cup holders Australia will see this defeat as a much-needed wake-up call.

“I thought our batting effort was very ordinary,” said Ponting.”We gave ourselves a sniff with the ball but we couldn’t get there. It was a a lot better wicket than 177, that’s for sure.”Wicket conditions were fine and it’s one where we should have got a lot more runs. We’ve been here before in the tournament as well so there’s no excuse from our part.”Australia had not faced a serious challenge in previous games and the result will surely stiffen their resolve ahead of the knockout phase of the competition, where a clash with India looks likely if the co-hosts beat West Indies on Sunday.Their batting display against Pakistan was an oddly subdued effort and Shane Watson had already been bowled for nine by the impressive Gul before skipper Ricky Ponting was dismissed in controversial circumstances.Pakistan claimed a catch when he appeared to edge Mohammad Hafeez into the gloves of Kamran Akmal but umpire Marais Erasmus turned down the appeal.Captain Afridi immediately used a referral which duly revealed a huge nick but an unseemly row had already broken out in the middle and Haddin appeared to push Younus Khan before Ponting walked off.

With wickets falling, Australia needed Haddin to make a major contribution but he was unable to resist the temptation to throw the bat at a Wahab Riaz delivery and was caught behind for 42.Cameron White was run out for eight, courtesy of a fine throw from square leg from Misbah-ul-Haq, before Michael Clarke missed an attempted pull and was bowled by Razzaq for 34.Mike Hussey (12) chipped left-arm spinner Abdur Rehman to wide mid-on and as Australia’s decline continued, another fine delivery from Razzaq jagged away and caught Mitchell Johnson’s edge to dismiss him for a duck.Resilience down the order is rarely absent where Australia are concerned but even a brisk 25 from Steve Smith could not prevent their lowest World Cup total since 1992.

“We made some good plans against them and the boys stuck to those plans very well,” said Afridi.”I think the way Umar Gul bowled was great. He’s worked very hard with Waqar Younis (coach) and the results are there in front of you.”Early wickets always put the shivers through a dressing room though and when Lee took a sprawling return catch to dismiss Mohammad Hafeez for five, Australia were back in the match.Paceman Lee then trapped Kamran Akmal lbw for 23 but a stand of 53 between Younus and Asad Shafiq put Pakistan back on course for their target.Lee had not finished, however, and and removed Younus (23) and Misbah with successive balls in his second spell – both from fine edges through to the keeper.Shafiq (46) and Umar Akmal steadied the ship again before the former nicked Johnson behind and a reckless heave from Afridi, who had made only two, again made things uneasy for Pakistan at 142-6.But Umar (44 not out) and Razzaq (20 not out) held their nerve to secure a morale-boosting victory with nine overs to spare – BBC