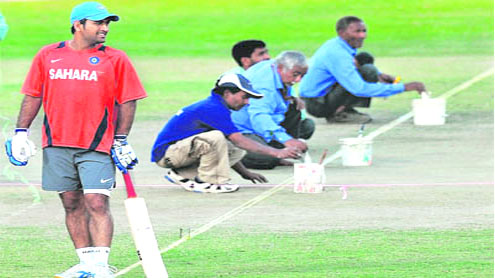 It’s not about Powerplays, really; it’s not about the final overs either, when they have tended to implode and have all but gone up in flames too.India’s biggest concern, as they go into the toughest match yet, is actually the amazing starts at the top. Each time Tendulkar has switched to cruise mode, batting has seemed spectacularly facile; each time Sehwag has exploded, (opposition) bowling has looked pitiably banal.Runs have flowed with such ease with them around that the rest have been lured into a maniacal frenzy: almost each of the lower-order batsman has gone in with the single intention of murdering the ball, if not the bowler; nobody has tried to play quietly under the shadow of commonsense.Not surprisingly, they have all only managed to self-destruct, leaving the team on the edge of helplessness, if not obliteration. Captain Dhoni had an explanation for this phenomenon: you are playing to the gallery. It isn’t as simple as that though. The glamour boys of the line-up are clearly not happy on the sidelines; or maybe, they just don’t know how to cope with this situation.

So, whenever they get a chance, they are attempting to outshine and outscore the other, instead of simply trying to maintain the tempo. Against England, India crumbled from 305 for 3 in the 46th over to 338 all out; against South Africa, they disintegrated from 267 for one to 296 all out. They got away with a tie against England and a broken nose and a bruised ego against South Africa.In both instances, India failed to last the 50 overs. That is the first thing they need to remedy when they take on the smarting Aussies; anything less will be suicidal. Similarly, if they want to learn from this tournament, they must treat the Powerplays with respect, if not fear: it’s better to be safe than be sorry.Most importantly, they should not mess with the batting order too much; a pinch-hitter should be conjured only if the run-rate drops alarmingly, not because they have many wickets or overs in hand. Even then, they should be specifically told to go from slow-to-all-out-attack only after a few deliveries, if not overs.Thankfully, India seem to have finally discovered the right combination; it helped that R Ashwin not only opened the bowling but was also effective. He kept the scorecard engaged and gave Dhoni the option of having at least one spinner on through the game.

On sub-continental tracks that is the best mode of attack and defense; it also gave some reprieve to Munaf Patel, even though he seemed amused to be the last bowling option. The small bursts by everybody meant that nobody had to take too much pressure, not even Zaheer or Harbhajan.Of course, all this looks like a nice plan only because one has not brought Australia into the equation. Let us not forget that they are the world champions; they have a formidable line-up, even if everything is not working in their favour. If a Ponting or Hussey gets going, India can easily go up in a puff; Watson and Clarke are adept at smothering the spin threat too.Equally, they have the best pace attack: if Lee or Tait or Johnson get an early breakthrough, they will go for the kill. India might panic a little sooner too and collapse in a heap, with or without the Powerplays. Either ways, it is going to be a battle of nerves and big-match temperaments.Only the stronger willed-ones will come through this unscathed. – TOI