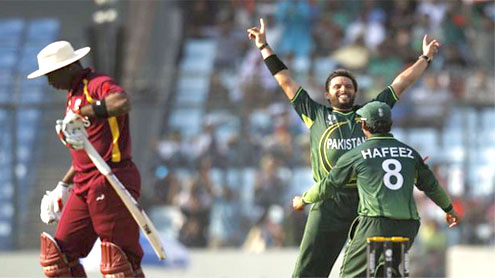 MIRPUR: It was like winning the skirmish ahead of a battle as Pakistan, not expected to go very far by their own fans back home, booked a berth in the semifinals. It also meant accomplishment of the primary target they had set themselves after surprisingly topping the group.”We have two more targets to achieve. The team is highly motivated and we hope to remain that way. We need to play well once again in Mohali,” Pakistan skipper Shahid Afridi told media.The Pakistanis received huge support from a full house Sher-e-Bangla crowd, and Pakistan coach Waqar Younus was least surprised. “Pakistan is a sub-continent team and it’s only natural that the crowd supports us.”In fact, the Pakistan team is expecting similar support at Mohali. “We are hopeful of a similar support at Mohali too as we expect people to come from across the border from Lahore and other parts,” Waqar said.

The myth that Mirpur was a lucky venue for the West Indies exploded as they suffered one of their worst defeats in the World Cup and the effects were immediate as their skipper failed to show up at the post-match media conference.”We are very, very disappointed. The captain was not feeling good enough to meet you guys and so I am here,” said West Indies coach Ottis Gibson. The coach indicated that there is a likelihood of a complete overhaul of the Caribbean cricket when he said that some serious decisions need to be taken. “For the last ten years, West Indies cricket has remained at the same level with same players. We need to think hard and change a few things before we host Pakistan in April. The seniors did not perform well and this is a fact and not a criticism,” he said.He minced no words when he said that his team failed to impress against big teams like South Africa, England and India in the league stage. “Look we stumbled into the quarterfinal after defeating Ireland, the Netherlands and Bangladesh but against the big boys we failed. Even today the pitch did not get anyone out, but it was a combination of poor batsmanship and very low confidence which brought about our downfall.” – TOI