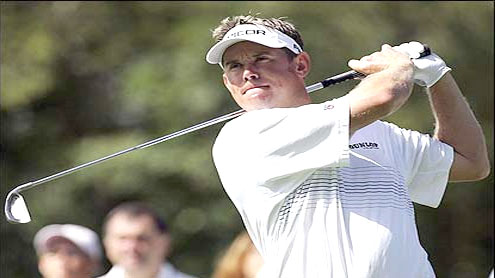 Britain’s Lee Westwood returns to action after a three-week break when he plays in the Houston Open on Thursday.The world number two has struggled for form so far this season but he is hoping to turn it around ahead of next week’s Masters at Augusta National.The 37-year-old said: “I’m here to win – I’d take a lot of confidence going into next week with that.”Westwood is yet to win a major tournament, finishing second in last year’s Masters and Open Championship.But a top-two finish this week will see him reclaim the world number one spot he lost to Germany’s Martin Kaymer last month.And Westwood believes he is getting back to somewhere near his best ahead of the first major of the 2011 season.”I’ve seen a big improvement in the three weeks since I last played so I want to play solidly,” he said.”I’m looking to play well and hit good shots and take the way I’ve been hitting shots on the range onto the course.”Westwood will be aiming for his third win on American soil, to add to the 20 titles he has already won on the European Tour.

“I’m looking forward to this week and next and this is generally the time of the year I start to play fairly well and get into top form,” he said.”I like to be competitive going into the week of a major, so that’s the reason I like to play at the Houston Open.”Westwood will this week line up alongside American pair Phil Mickelson and Anthony Kim, the players who finished either side of him in the Masters top-three last year.Mickelson won his third green jacket in 2010, finishing three strokes ahead of Westwood, while Kim is the defending champion in Houston.And Worksop-born Westwood is hoping the greens at Redstone Golf Club will provide a valuable taste of what is to come at Augusta.”The main point is they try to get the greens as quick as possible, so when you get to Augusta next week it’s not as big a shock,” he said. “They’re pretty immaculate here and run with great pace.”A strong field in Texas includes fellow members of the world top-10 in Matt Kuchar and Steve Stricker, along with major winners Ernie Els and Padraig Harrington.Also competing is American Gary Woodland and rising Venezuelan star Jonathan Vagas, who have both won on what has been an interesting 2011 PGA Tour season so far.”Every week out here there’s a strong field and you have to play well no matter who’s playing,” Westwood said.”You only have to look at the winners this year; they haven’t been predictable ones, there’s been a lot of first-time winners, and it just shows the strength in depth at the moment.” – BBC

Joy and despair after cricket epic