107 officers appointed in PM Secretariat in violation of constitution 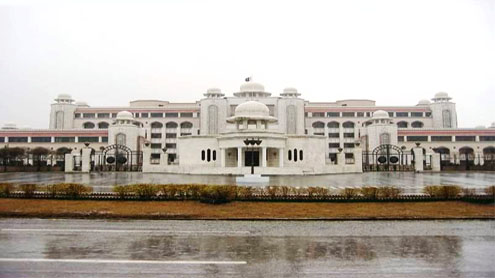 ISLAMABAD: The appointment of 107 officers in PM Secretariat including Principal Secretary to PM has been made in clear violation of the constitution.According to a list provided to the Parliament by the PM secretariat currently in PM secretariat Public 84 officers of grade 17 and above and 23 officers are working in Internal secretariat out of which 81 belong to Punjab.

Quota allotted to Sindh, Khyber Pakhtoonkhawa and Balochistan in service was overlooked. Only 2 officers from Balochistan, 7 from Sindh Urban and Rural and 15 officers from Khyber Pakhtoonkhawa are working in both the secretariats. This strength is far less than the prescribed constitutional quota of these provinces. As per constitution the quota for Punjab and Islamabad has been fixed 50 percent, Sindh rural 11.4 percent, Sindh urban, 7.6 percent, Khyber Pakhtoonkhawa, 11.5 percent, Balochistan, 6 percent and merit 7.5 percent. But this benchmark is being violated openly in prime minister secretariat. Officers from Punjab are posted on several senior posts. Baloch nationalist parties and opposition have decided to raise this matter in parliament. – Onlinenews