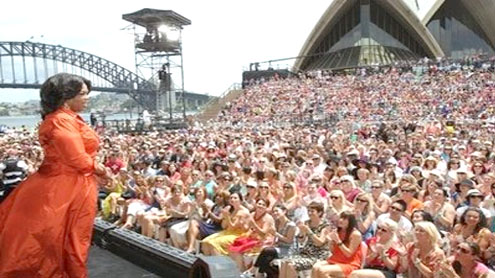 SYDNEY: US talk-show queen Oprah Winfrey on Thursday moved to downplay comments in a new documentary-style show suggesting her high-profile tour of Australia in December was not a smooth ride.In Season 25: Oprah Behind the Scenes, Winfrey revealed concerns about the large crowds in Melbourne and on Queensland’s Hamilton island and that she was worried about flies and heat at Uluru, or Ayers Rock.She was also unsure how to pronounce Prime Minister Julia Gillard’s name and decided to break it into two words – “gill” and “lard” – so she could pronounce it properly when they met for a walk.

After the comments ran in Australian newspapers, she issued a statement, insisting she loved every minute of her visit.”When I say I love Australia, I mean what I say. I LOVE AUSTRALIA,” she said.”It was one of the most life changing, mind expanding, once in a lifetime extraordinary experiences for all of us, and I would never want any of my comments taken out of context to make it seem otherwise.”I have so many great memories. The (Great Barrier) Reef was breathtaking, Sydney was spectacular, and I was mesmerized by Uluru and so glad I went there.”I was overwhelmed by the response of the people of Melbourne and was honored to meet the Prime Minister, Julia Gillard, and to feel the welcoming energy of 10,000 people in Federation Square,” she added.”I can’t wait to come back.”The behind-the-scenes show airs on Winfrey’s new American cable TV channel OWN and follows her team of producers as they plan and shoot episodes of the talk show, including her four-part Ultimate Australian Adventure.The Australian trip was the first time Winfrey had recorded episodes of her chat show outside the United States in its 24-year history.She brought more than 300 US audience members with her and interviewed some of Australia?s biggest stars, including Nicole Kidman and Keith Urban, as well as Hugh Jackman and Olivia Newton-John. – Yahoonews