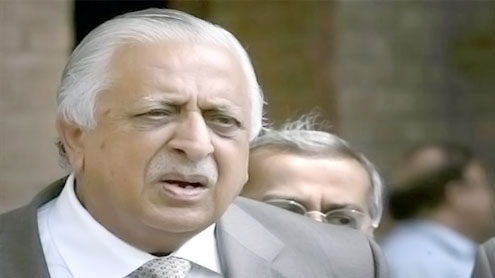 WAHGA BORDER: Pakistan Cricket Board (PCB) Chairman Ijaz Butt said that Pakistan Cricket Team played brilliantly in World Cup tournament whereas winning or losing is the part of the game.Talking to the media on Wahga Border, Chairman PCB Ijaz Butt expressed besides dropping four catches of Tendulkar, our team restricted Indians to 260 runs. The pitch slowed down later in the innings whereas Misbah-ul-Haq and Younis Khan batted very slow. Umer Gul couldn’t carry on his rhythm in bowling. Their decision of taking batting power play was wrong.Chairman PCB Ijaz Butt added that Wahab Riaz has proved his selection right by sending back five Indian players to pavilion. On the proposals Shoaib can’t be included in the team because he couldn’t even move in second spell.He added that his meeting with the Indian counterpart and ICC Chief was a positive step forward because both agreed to organize cricket series in Pakistan.He added that Indian Prime Minister Manmohan Singh insisted on arranging a series between Pakistan and India. – Onlinenews