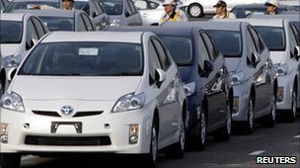 Sales of new vehicles in Japan have plunged in the aftermath of the earthquake and tsunami that hit the country’s north-east coast.
Automobile sales in March fell by 37% compared with the same month a year ago.
Japan’s auto sector has been hit hard by the quake, with production at biggest auto manufacturers halted due to a shortage of parts and power cuts.
Toyota led the falls with its sales down 46%.
Nissan’s sales slumped 38% while Honda’s fell 28%.
The earthquake and tsunami on 11 March caused widespread damage to Japan’s infrastructure. There have been concerns that the breakdown of supply chain and shortfall of parts will dent profits at Japan’s carmakers.
The latest numbers are the first indications of the extent of damage to the sector. Earlier on Friday, Toyota president Akio Toyoda warned that the suspension of production at its factories would hurt the company’s profits