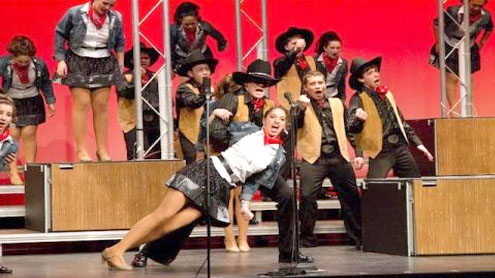 Now in its second season, the TV show “Glee” has struck a chord with audiences in the United States and elsewhere. The story revolves around the members of a high school student chorale group, known as ‘New Directions’. Every episode features the actors performing popular songs with complex choreography. Here in the United States, many schools have similar vocal groups.One of them, Touch of Class in Chantilly, Virginia,  is not only celebrating its 25th anniversary, but was also voted America’s Favorite Show Choir in a national contest. Since then, it has drawn comparisons to “Glee.”Glenn Cockrell has been involved with the group since the beginning, as choreographer, show designer and – for the last eight years – as its director.”We do a wide range of music that goes through the whole realm of pop,” Cockrell says. That includes Broadway show tunes, jazz, country, and of course rock.

The 39 students, ranging from 16 to 18, work hard. This isn’t just about singing.  In addition to classes with Cockrell, they rehearse after school twice a week for two hours to learn dance moves.Sarah Pramstaller has been their choreographer for the last five years. She was a member of Touch of Class when she was a student here and feels the experience helped prepare her for a career in musical theater. “It is different than performing in musical theater and it is a little different from what happens in New York, but it is a great foundation for singing, dancing, acting, performing in general.”Pramstaller returned to Chantilly High School when she married and started a family. “I wanted to move into more of a director/teacher position. So it was a perfect fit.”Of course few of her students will go on to careers in musical theater, and not all of them even aspire to that.”I did show choir because my friends were doing it. It was something cool for us to do,” says Greg Garcia, 17.But Julia Holmblad, 18,  is in it for the opportunity to perform. “Performing is something you can’t do in any other class, and it’s something I love to do.”

It is rare that a month goes by without at least one performance, but this year has been exceptionally busy for the young performers. “They are getting opportunities that you don’t always get. We are going to get to be at the Kennedy Center in Washington, DC, at Constitution Hall,” says Cockrell.The group was voted America’s Favorite Show Choir in an online competition sponsored by Parade  magazine which drew more than 1,000 entries.  Choreographer Pramstaller says there are similarities to “Glee,” the popular TV show. “When they show footage from the competition, it is very, very much like that.”But Cockrell says “Glee,” with its romantic entanglements and characters who sometimes behave deviously, is not a true reflection of high school. “We find the music is awesome. It is definitely the kind of stuff we would do in our program. But the story line is something we do not always emulate in the classroom setting.”But “Glee,” he says, has definitely given his students a boost by bringing attention to the performing arts programs in the schools. “There are some really great things going on in the schools and we need to support that. – Voanews

US extends airstrike role in Libya through Monday

US extends airstrike role in Libya through Monday