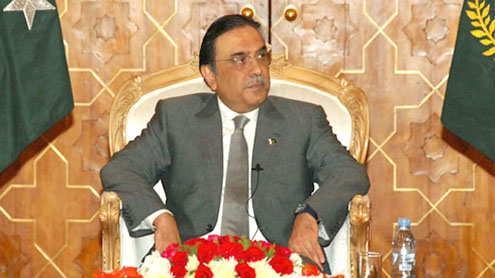 The President said, “he (Bhutto) awakened the people, gave them hope and made them realize that they were the fountainhead of all political power.”      “It is because of this realization among the people that dictatorship has not been able to take roots in the country despite repeated subversions of democracy. This is one of Shaheed Bhutto’s greatest achievements and no one can rob him of it”, he added.The President said, “It is indeed a lasting tribute to his memory that Bhutto and Bhuttoism still lives in the hearts and minds of the people. From his grave, Shaheed Bhutto haunts dictators. Reverberations of “Jeeay Bhutto” still send shivers in the enemies of democracy.” President Zardari said, Shaheed Bhutto has left deep footprints in the sands of history. “While his killers have been consigned to the dust-bin of history, Shaheed Bhutto lives and dominates the political landscape of the country (Zinda hai Bhutto)”, he remarked.The President said, “On the eve of his 32nd martyrdom anniversary we have filed a reference with the Supreme Court to revisit the trial of Shaheed Zulfikar Ali Bhutto”, adding; “This is not to seek revenge against the killers but to correct a historical wrong, to heal the wounds of the past and to promote the cause of national reconciliation.”President Zardari urged the party workers to rededicate themselves to the ideals of democracy for which Shaheed Zulfikar Ali Bhutto lived and laid down his life.“On this day we also pledge to continue our forward march to empower the people and make Pakistan strong and prosperous.APP