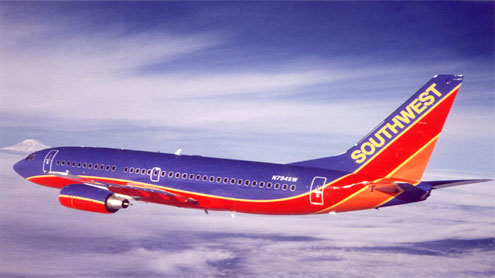 PHOENIX: Boeing engineers figured the joints holding the skin in place on their older 737 jetliners would begin to wear, but only as the planes neared retirement. They never expected it to happen in middle age.Caught off guard when a piece of the fuselage on a Southwest Airlines jet peeled away as it flew over Arizona last week, they are rushing to create inspection and repair instructions for hundreds of similar planes in service worldwide.

Federal aviation officials issued an emergency order Tuesday that requires inspections of certain types of 737s.Southwest, which operates nearly all of the U.S.-registered 737s requiring urgent inspections, inspected its planes and found five with the same types of cracks suspected of causing the 5-foot-long hole to open on Flight 812 last Friday.While those planes are being repaired, the rest are again heading into the skies.The failure raised concerns about the adequacy of safety inspections that failed to catch the problem even though nearly two dozen other instances of metal fatigue were spotted during an inspection of the Southwest plane a year earlier.And it also focused attention on the specific 737 model. That model was redesigned after similar joint problems caused a huge section of the roof of an Aloha Airlines jet to break off in 1988. A flight attendant was sucked out and fell to her death.

“We want to understand why we saw the extent of tearing on the aircraft and this size of a rupture so that we can prevent it from happening again,” National Transportation Safety Board Chairman Deborah Hersman told reporters Tuesday.Hersman added that the NTSB will also investigate how often inspections are done and whether the schedule is appropriate.Boeing never expected failures in the riveted skin joints running along the top of the 737-300, 737-400 and 737-500 models until the planes were much older, said Paul Richter, Boeing’s top engineer for older 737s.Richter said Boeing also didn’t anticipate the need to inspect for cracking on the redesigned lap joints — where two pieces of the fuselage skin overlap — until it had reached 60,000 pressurization cycles, the number of takeoffs and landings.And it certainly didn’t expect such a dramatic failure, he said.The Southwest jet, which made an emergency landing in Yuma, Ariz., had about 39,000 cycles and was 15 years old. Pressurizing and depressurizing the cabin can weaken the aluminum skin and cause cracking.

“It’s regrettable that we had to accelerate our plans to recommend inspections based on an event of this nature,” Richter said during a conference call.Boeing’s “service bulletin” and the FAA order will require inspections after 30,000 cycles. The company has written repair plans for three of the five Southwest planes with cracks and is examining the rest.The aircraft maker said 579 airplanes in all will eventually need the stepped-up inspections, though it did not give a breakdown about the numbers in use in the U.S. and overseas.Boeing’s service bulletin requires inspections within 20 days for all the planes in the fleet with more than 30,000 cycles. The FAA will require a repeat inspection every 500 flights, Richter said.The FAA is requiring about 175 planes to be inspected at once, with nearly all of the 80 in the U.S. belonging to Southwest. Carriers in other nations will be covered by the order because of agreements those countries hold with the FAA.Boeing started making the 300 model in 1993 and delivered the last of the “classic” series in 2000. The company’s next generation 737 models now in production use an updated lap joint design.Since there had been no previous accidents or major incidents involving metal fatigue in the middle part of the fuselage, Boeing maintenance procedures called only for a visual inspection, federal officials said.An aircraft expert said that’s exactly why you do more thorough inspections — to find problems that engineers did not anticipate.”The trouble is that what you anticipate and what actually happens are two different things,” said Paul Czysz, professor emeritus of aeronautical engineering at St. Louis University. “You might have anticipated 60,000 hours, but sorry, that’s not what the airplane did.”

The only way to find the subsurface cracks or the ones hidden between the overlapping pieces of the fuselage would be to use an electromagnetic technology known as eddy current.After the Aloha accident, it was discovered that the bonding material used in the lap joints of some earlier generations of airliners was particularly susceptible to stress, aviation safety consultant John Cox said.However, a different type of bonding material used in newer planes like Southwest’s is proven “to be very good,” he said.Since there are many lap joints in a single airliner, “if you tried to eddy current every lap joint on every plane, the amount of time and energy it would take would be literally staggering,” Cox said.The FAA is also required by law to weigh the cost of the safety procedures it tells airlines to follow against the possible safety benefits. If there is no evidence of a previous safety problem, it becomes more difficult to justify the cost.”I don’t think the public understands the bar that has to be cleared by regulatory agencies,” said Bill Voss, president of the Flight Safety Foundation in Alexandria, Va., an aviation industry-funding organization that promotes safety.Investigators said the tear along a lap joint on the Southwest jet came despite a recent inspection where the plane was taken apart so that inspectors could see into places not normally visible.

They found 21 instances of cracked frames, which are part of the fuselage, or cracked stringer clips, which help hold pieces of aircraft skin together.Earlier, NTSB investigators said they had found both cracks that were big enough to see with the naked eye but were hidden between overlapping pieces of metal. They said they had also found subsurface cracks.That’s a significant number and should have been a warning to Southwest’s maintenance team that there might be more extensive cracking that wasn’t detectable by a visible inspection alone, Voss said.The plane “hasn’t just had a lot of cycles, it has had cycles that have put some wear and tear on the structure,” Voss said.Voss compared the inspection process to removing a tumor. Surgeons should “always check around to see if there are any nodes inflamed or whatever else around it. Depending upon what they find, they can go a step further,” Voss said.Hersman noted that at 15 years, the Southwest plane had only reached what is considered midlife for an airliner.”If we think something needs to be done, whether the aircraft is 15 years old or 50 years old, we will address it,” she said. – Yahoonews