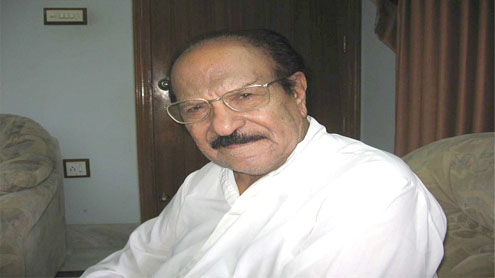 HYDERABAD: Renowned historian and research scholar of Pakistan Dr. Nabi Bux Baloch passed away here at 3.00a.m on Wednesday at his sister’s home. He was 94 and survives by five sons and three daughters.Dr. Nabi Bux Khan Baloch was scholar of Sindhi, Persian, Arabic and Urdu languages. He was author of a number of books on Sindh history, and about 42 volumes on Sindhi Folklore. He also compiled and published Sindhi dictionary in five volumes. Moreover, he compiled Sindhi-to-Urdu, Urdu-to-Sindhi dictionaries co-authored with Dr. Ghulam Mustafa Khan.He has compiled works of Classical Sindhi poets including Shah Inayat, Qadi Qadan, Khalifo Nabibakhsh, Hamal Faqir and compiled works of Shah Abdul Latif Bhittai in ten volumes.

Dr. Nabi Bux Khan Baloch was born on December 16, 1917, in Jaffer Khan Laghari village, Taluka Sinjhoro, Sanghar District.Late scholar started his education from Nowshera Feroz High School. He obtained his B.A. from Jhuna Garh College from Bombay University and got his M.A. Arabic First Class First and LL.B from Aligarh Muslim University. In 1946 he went to Columbia University where he did his Master’s in Education and got his Doctoral Degree in the same field. His thesis was on Teacher Education in Pakistan.After completing the Education, he returned to Pakistan. For a short period he worked in Information and Broadcasting Division as Officer on Special Duty and was to join Damascus in the Ministry of Foreign Affairs when Allama I. I. Kazi, the founder of Sindh University, invited him to join the newly established University as Professor of Education to establish first Department of Education in Pakistan.

Later, he rose to the positions of the first Dean of Education Department and Vice-Chancellor of University of Sindh. In 1976, he was called upon to join Ministry of Education in Islamabad where he established first Islamic University Islamabad, initiated the scheme of Great Books of Islamic Civilization under Pakistan National Hijra Council.He also worked as first Chairman of Sindhi Language Authority and Chairman of Allama I.I. Kazi Chair. He was Professor Emeritus.His correspondence in Sindhi Language has been published by Sindh Moti Manik Tanzeem Hyderabad and Institute of Sindhology, University of Sindh.Latest work covering his correspondence with world scholars from 1946 to 2006 has been published under the title ‘World of Work: A Scholar’s Dilemma’ an introduction covering biographical landmarks of his life, published by Institute of Sindhology, University of Sindh in March 2007. – Thenews