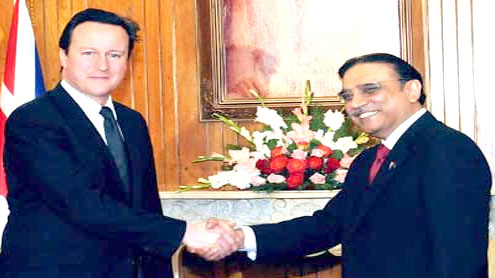 Briefing the media about the meeting, Spokesperson to the President Farhatullah Babar said that both the leaders affirmed their commitment to further enhance strategic and co-operative ties between the two countries based on shared interests and mutual respect.He said that the President, while, welcoming David Cameron on his first official visit to Pakistan, said that the visit will further boost the already existing close bilateral equation between two countries.The President said that the presence of over one million British Pakistanis was a living bridge adding that they are an asset for both Britain and Pakistan and “we are proud of the contributions they are making to UK’s progress and towards promoting Pak- UK relations.”  Baroness Sayeeda Warsi, Chairperson Conservative Party is a role model not only for British Pakistanis but Pakistanis as well, he said.The President said that the Pak- UK strategic dialogue covering important facets of the relations was a significant step and was vital for the two countries, for the region and for the world as a whole and stressed the need that the two sides should gear up to achieve the objectives that they have set for themselves in the Declaration of Enhanced Strategic Dialogue.

He said, “we believe that the National Security Dialogue, comprising  political, military and intelligence tracks would lead to creating a better understanding in bringing about clarity on issues of global, regional peace and security.”Pakistan wants to have an indepth engagement with the UK on these issues, he said and added that such an engagement must be premised on sovereign equality, mutual trust and respect and mutual interest.Discussing Afghanistan situation, the President said that peace and stability in Afghanistan was necessary for regional peace and emphasized on Afghan led peace process in the country rather than foreign led. The President said that an appreciation of the dynamics of human relations by the international community was no less important than machines and weapons.The President said that any initiative on Afghanistan should ensure Afghan ownership of the process as well as territorial integrity of the country and that its soil was not used against any other country. Pakistan stands for peaceful, stable, friendly and a united Afghanistan, the President said.The President said that the Government and the people of Pakistan greatly appreciate British acknowledgement of Pak counter terrorism efforts and its contributions through funding and capacity building.

He said that Pakistan has rendered great sacrifices both human and material than any other country in the fight against militancy and terrorism.He said that this was a long-drawn battle where force alone cannot accomplish complete victory as it was also a battle of hearts and minds.The President said that the government besides following its policy of dialogue, development and deterrence is also undertaking measures to wean away the youth falling into the trap of militants. The President said Britain and Pakistan needed to work closely to further enhance their partnership in diverse areas mainly in trade, investment and education with a view to eliminate militancy and terrorism from Pakistan and promote peace and security of the region and the world.The President said for this purpose he has been urging that the international community, especially the allies in allowing market access to Pakistan to generate jobs in the country and win the battle of hearts and minds through provision of economic opportunities.The President welcomed British assistance in education sector and the role and contribution of DFID (Department for International Development) in this regard through various initiatives like the proposed Education Fund for Sindh and its close association with the Pakistan Education Task Force.

Describing the situation as ‘ Education Emergency in Pakistan’ , the President said that he particularly welcomed the enhanced British assistance in education and described it as crucial for neutralizing militant mindset and for social and human uplift.Farhatullah Babar said that Britain has committed nearly 450 million pounds annual economic and development assistance to Pakistan for four years from 2011. Out of this 650 million pounds have been earmarked for education alone over the next four years.Prime Minister Cameron recognized the sacrifices made by Pakistan’s military, civil law enforcement agencies and people in fighting violent extremism and militancy and appreciated the efforts of the democratic government.Farhatullah Babar said that the President while discussing the economic challenges facing the country said that Pakistan was going through a very challenging economic phase and the government was taking hard decisions to revive and stabilize the economy hard hit by the consistent war against militancy and the devastating floods.He appreciated the UK’s flood relief assistance and UK’s development assistance through the government system.The President called for increasing bilateral trade to a level of œ 2.5 billion by 2015 from around œ1.52 billion at present which he said is indeed achievable provided we create the right setting.

He said that Pakistan offers attractive incentives for foreign investment including foreign equity of up to 100% and repatriation of 100% capital and profit.He said that UK was one of the largest investors in Pakistan and invited British corporate sector to take advantage of the incentive package offered by the government of Pakistan.The President said that Pakistan also offer establishment of country specific economic zones to friendly countries and offered that UK may also consider establishing economic zone in Pakistan.The President said that Pakistan- Britain Trade and Investment Forum (PBTIF) provide an institutional mechanism for interaction between businessmen of the two countries.The President also sought Britain’s support on GSP Plus, commencement of negotiations for Pak- EU Fee Trade Agreement and also the resuming of the export of fisheries products to the EU.

He also called for revisiting the suspension of British Airways flights to Pakistan which were suspended after the Marriott terrorist attack in 2008.Discussing regional situation, the President said that the dialogue process between Pakistan and India has resumed and Prime Minister Gilani had a very good meeting with Prime Minister Manmohan Singh at Mohali and they have decided to make determined efforts to move the relations forward across the board.He said that dialogue was the only way forward to resolve all outstanding issues between Pakistan and India.David Cameron said that UK would continue its support of the democratic dispensation in Pakistan and assured Britain’s assistance and cooperation in curbing militancy, revival of economy and in fields of trade, investment and education.The President later hosted dinner in honour of the British Prime Minister David Cameron. – APP