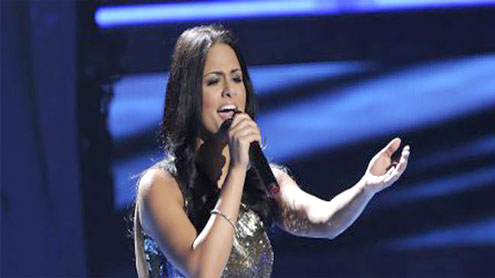 “American Idol” finalist Pia Toscano is on a high.After weeks of expectedly performing ballads, the soaring 22-year-old songstress from Howard Beach, N.Y., earned praise from the Fox talent competition’s judges for strutting around the stage while powering through Tina Turner’s up-tempo tune “River Deep — Mountain High” on Wednesday’s rock `n’ roll edition. Toscano previously promised to sing that tune.”Murderer! Murderer!” screamed “Idol” judge Steven Tyler. “Pia, you killed it.”Other singers who switched it up included 17-year-old high school student Scotty McCreery of Garner, N.C., and 22-year-old rocker James Durbin of Santa Cruz, Calif. Randy Jackson said he’d seen “a new Scotty” after McCreery jazzed up Elvis Presley’s “That’s All Right,” while an emotional Durbin slowed down on George Harrison’s “While My Guitar Gently Weeps.””It’s good to see that not only did your guitar gently weep, but so did you,” said Tyler.

acob Lusk, the 23-year-old spa concierge of Compton, Calif., stayed true to his gospel roots, replacing his planned performance of Marvin Gaye’s sexually charged “Let’s Get It On” to Michael Jackson’s inspirational “Man in the Mirror.” The judges commended his decision to stay true to his moral conviction. Jennifer Lopez called Lusk’s performance “perfect.”Lauren Alaina seemed to impress with Aretha Franklin’s “Natural Woman,” but Jackson noted that the 16-year-old high school student of Rossville, Ga., “only took a very difficult song and did a good job.” He also proclaimed that 21-year-old singer Stefano Langone of Kent, Wash., got off to “a jerky start” with Percy Sledge’s “When a Man Loves a Woman.””I liked it, but I wasn’t jumping up and down,” said Jackson, who was shushed by Lopez.

The biggest comeback of the night was reserved for perennial low vote-getter Haley Reinhart, the growling 20-year-old college student of Wheeling, Ill., who found herself back in the judges’ good graces with a spirited rendition of Janis Joplin’s “Piece of My Heart.” Other singers who previously appeared as low vote-getters also escaped harsh criticism.Jackson told 26-year-old singer Paul McDonald of Nashville, Tenn., that he “loved” his crazy version of Johnny Cash’s “Folsom Prison Blues,” and he celebrated 20-year-old film camp counselor Casey Abrams of Idyllwild, Calif., for “making the upright bass cool” after he accompanied himself on Creedence Clearwater Revival’s “Have You Ever Seen the Rain?””I feel like I have to give 150 percent every single time,” testified Abrams, who was saved by the judges.Will it be enough to rescue Abrams again? One of the top nine finalists will be eliminated Thursday – Yahoonews